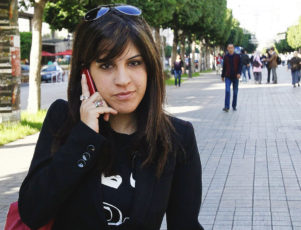 Activist and avid blogger, Lina Ben Mhenni is no stranger to both accolades and threats. Through her blog A Tunisian Girl, which is written in Arabic, French and English, Ben Mhenni has reported on the overthrow of the Tunisian government, behind the scenes of the Tunisian revolution and the continued threat of corruption in her country.

As one of the only sources of uncensored information during Tunisia’s Jasmine Revolution, Ben Mhenni has been awarded the Deutsche Wells International Blog Award, the El Mundo’s International Journalism Prize and received a nomination for the Nobel Peace Prize in 2011.

Born in 1983, Ben Mhenni was exposed to political activism from an early age. Her father, Sadok Ben Mhenni was a left-wing militant, who opposed the regime of former President Bourguiba, and was detained and tortured in prison. Her brother helped establish the Tunisian office of Amnesty International and she grew up hearing her family discussing politics, reading books and watching the news. She started writing a blog in 2007 and later launched A Tunisian Girl to cover issues surrounding freedom of expression, human rights and social problems facing women and students in Tunisia.

From 2008 to 2009 she studied in the United States and taught Arabic at Tufts University in Massachusetts. Upon her return she took a position as a teaching assistant in Linguistics at the University of Tunisia. In May 2010, Ben Mhenni and her friends organized a protest against the government’s censorship of the media via the internet, and by the time the protests against Ben Ali started in December, her blog had become an important source of information for both Tunisians and the international media.

For many years Ben Ali had lead an oppressive regime in Tunisia, prohibiting any opposition and abusing human rights. Opponents to his regime were tortured and killed and journalists intimidated and silenced. During the protests, Ben Mhenni visited Sidi Bouzid and Kasserine and was one of the first to report on the atrocities committed there by Ben Ali’s security forces. She published video footage and photographs of police injuring and killing protestors and revealed the victim’s identities online. She also visited victims in hospitals and interviewed their families, publishing everything to her now infamous blog. Never hiding her name, Ben Mhenni put herself at risk to show the world the determination of the Tunisian people to overthrow Ben Ali.

Following the revolution, Ben Mhenni was involved in the interim government’s reforms to media and information laws, but resigned shortly after. However, she continued to track the progress of press freedom and human rights in Tunisia, and attempted to boycott the Constituent Assembly elections due to the fear the leading party, Al-Nahda would buy votes and not be moderate. In 2011 she published a book ‘Get Connected’ and won the Duetsche Welles Best Blog award and was nominated for the Nobel Prize.

The Reach for Democracy VS Clicktivism

Ben Mhenni continues to observe and critique the development of human rights in Tunisia, but says the country still has a long way to go. A new constitution has been written and organized elections have been transparent and democratic, but the regressions are still alarming says Ben Mhenni. Children are still being forced to drop out of school to work, women are dying during child birth due to lack of equipment in hospitals, and people still do not have enough electricity of running water in Tunisia. Ben Mhenni says Tunisia still lacks honest politicians and people who see being a citizen implies rights, but also duties.

Although Ben Mhenni maintains she has never been an activist, she says people today think they can change the world by clicking the ‘Like’ button. “It is not enough to publish a status, or a video, or share a Hashtag,” she told Huffington Post. “You have to work in the field, meet people, and be present during the demonstrations.” Ben Mhenni continues to act on her words, she and her father have started an initiative to create libraries in prisons to promote culture and thwart terrorism, and she aims to teach the importance of organ donation after receiving a kidney transplant from her mother.