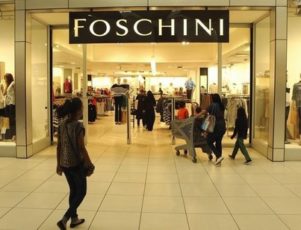 Foschini, which is expanding outside South Africa as consumer spending tightens in its home market, said that headline earnings per share (EPS) rose to 1,056 cents for the year to March 31, from 898 cents the previous year.

“The group’s overall gross margin has improved from 47.3 percent to 49.7 percent, mainly as a result of the higher Phase Eight clothing margin,” the company said.

Foschini has instead focused on increasing cash sales, which accounts for less than half of turnover excluding Phase Eight but was boosted to 58 percent by the British retailer, making the group less vulnerable to the credit cycle, Thunstrom said.

The company said it plans to open at least 50 more Phase Eight stores this financial year.

Sales also benefited from the inclusion of the British retailer and rose 31.2 percent to 21.1 billion rand ($1.4 billion). Excluding Phase Eight, the increase was 11.6 percent.

The retailer extended its push into the northern hemisphere, buying British high street chain Whistles in March, as consumers in South Africa rein in spending because of higher interest rates, rising energy costs and unemployment at more than 25 percent.

Foschini has been the best performer among South Africa’s listed fashion retailers this year, with its shares rising more than 17 percent, against a 6 percent decline for larger rival Mr Price.

Shares in Foschini were up 2 percent at 141.85 rand by 1357 GMT, paring gains of more than 3 percent before the release of its annual results.