Kilamba, a chance for the Angolans 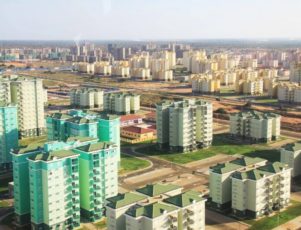 During the post-war reconstruction process in Angola, China and some European businesses have been actively working to bring about a number of important building projects. Of these, the star project is the city of Kilamba, where efforts have transformed a rural zone into a undeniably modern city. Kilamba is the fruit of a collaboration between two companies: The Chinese company CITIC Construction, led by Chen Xiaojia, and the investment fund Pierson Capital, led by Pierre Falcone.

Improvement of the Quality of Life

The new residents are particularly satisfied by their new life in Kilamba. They confide to Meng Qingshang, journalist for a Chinese television channel: “The conditions in we were living before were not good. It was a house which did not belong to us, and it was far from the city. With the improvement of our revenues, we were able to move into this new city. We live much better.” Indeed, their apartment is more than 120 square meters, and is a spacious residence for a family of five.

The Santos family makes up some of the thousands whose prospects have improved thanks to the huge building project by CITIC Construction and Pierson Capital. For the children of this family, it is also the chance to meet new people, and to interact with their neighbors. The cadet, Eduane Santos, confided to the journalist that “My life here is very different. Here, it is modern. I have made many new friends here. Before this, I often played alone.”

Kilamba is ideally situated a few kilometers from Luanda. A portion of the city’s buildings have been reserved as social housing. Thanks to this project these Angolans live a better life, and indeed for many residents, it is the first time that they live in their own apartment. The group of apartments consist of residencies which represent a large split from their old homes. The apartments have running water and electricity 24 hours a day, which was formerly difficult to find due to the ravages of the war in Angola.

The buildings of Kilamba comprise one of the largest residential sectors in the world. The city consists of over 100,000 residents. But the construction has not been without its issues, when the project started in 2008, the artisans had  difficulty in finding quality building material on the local markets. They were then compelled to send more than 2 million tons of material directly from China. In total, it has took four years to complete the project.

Today, the post-war construction continues to go forward, leaving in place new ambitions more important still. The Angolans continue to believe that the development of the city will continue, and will continue to bring them new professional and commercial opportunities.

Chen Xiaojia, president of CITIC Construction, has declared that “the project has improved local employment opportunities as well as the quality of life. […] The residencies are well equipped, and the city offers a large range of public infrastructure. We have built schools, sewer systems, as well as electric and water systems. I have learned that the residents of Luanda are proud to live in Kilamba New City. It’s because of this that we are proud.”