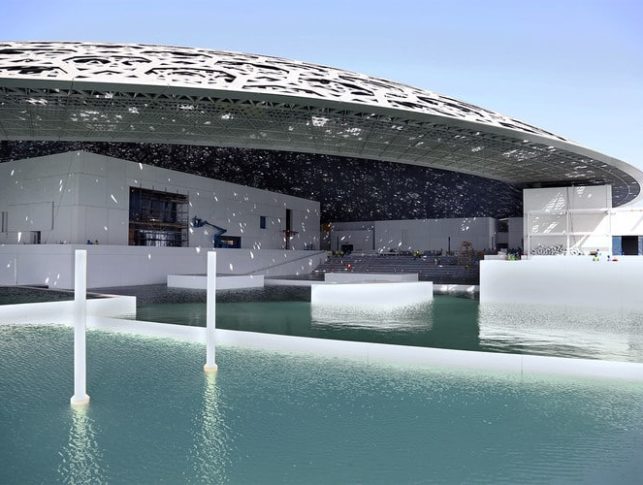 Sitting on 6% of the world’s oil reserves, Abu Dhabi has pushed forward with a construction program that has seen a combined USD $37 billion poured into several mega building projects in the region, despite 2014’s slumping crude oil prices. Expected to be completed by 2020, the ten biggest projects under construction include Abu Dhabi’s own Louvre art museum, a nuclear power plant, sewerage tunnel, hospital, special burns clinic, highway, housing development, residential area and a new air terminal, among others.

Construction on the projects began before the global economic downturn and Abu Dhabi has had to make sharp cuts to spending over the past few years. According to credit-rating company Fitch, spending was cut by a 20% in 2015, after falling oil prices led Abu Dhabi to run a fiscal deficit of 13.2% of GDP that year. However, the recovery of oil prices in 2016 has eased some of the pressure from government finances and several construction projects are about to be unveiled.

The Louvre, Abu Dhabi, is among the most anticipated construction projects set to be finished by the end of May. The white dome-covered building is surrounded by water and was designed by French architect, Jean Nouvel. Costing $1.14 billion, it includes a 280-seat theater and a children’s museum. Also, to be completed later in the year is a $1.5 billion housing development, Jabel Hafeet, which will provide homes for 3,000 people, including a school, a clinic and other facilities; $1.14 billion residential development, Ain Al Faida, which will house 2,000; the $1.1 billion, Sheikh Shakhbout Medical City, which specializes in treatment for burns and has 739 beds; and a new sewerage tunnel, which is said to be among the world’s longest at 25 miles in length and at a cost of $1.5 billion.

Projects to be completed in the following years include, the first nuclear power plant in the United Arab Emirates, Barakah Nuclear Plant, which will supply 25% of the country’s electricity by May 2020, according to the Emirates Nuclear Energy Co-operation. The $23 billion plant includes four reactors, which will produce a combined 5,600 megawatts. Abu Dhabi’s newest air terminal, the $3.5 billion, Midfield Airport Terminal, which will have 49 gates, shops, restaurants and a hotel. The terminal was built over six levels and will double the airports capacity to 30 million passengers a year. It is expected to be finished in January 2019.

Also under construction is a new highway, the E11, which will link Abu Dhabi with the Saudi border at a cost of $1.5 billion. The $1.2 billion, Al Ain Hospital to be completed by December 2018 and a new district in Abu Dhabi called Zayed City. Currently the road network, sewerage, electricity, lighting and water infrastructure is only 19% complete. The $909 million project is expected to be finished by 2020.