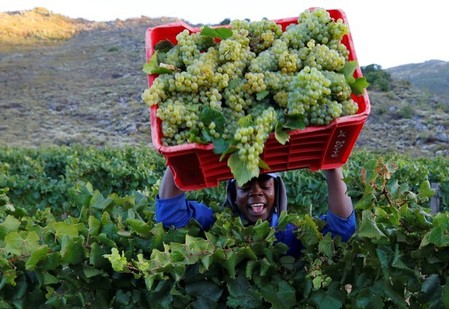 JOHANNESBURG (Reuters) – South Africa, the world’s seventh biggest wine producer, is expected to see the smallest harvest in more than a decade in 2018 after drought and lower plantings hit yields, industry experts said.

The winelands are mostly in the coastal Western Cape province which was declared a disaster area in May due to a severe drought that has dried up dams and led to water restrictions for residents and industry.

The 2018 harvest is expected to be much smaller than the estimated 1,434,328 tonnes produced in the 2017 crop, based on a survey conducted in the last week of November by industry body South African Wine Industry Information and Systems (Sawis).

Sawis, which will give its final crop estimate in August, did not give a figure for 2018 but said it would likely be less than in 2017.

“If in certain areas we don’t get rain it could end up smaller,” Sawis Chief Executive Officer Yvette van der Merwe told Reuters.

VinPro, an industry body, expects the 2018 crop to be the smallest since 2005, when 1,157,631 tonnes were harvested due to drought and diseases in some production areas.

“This means that wine grape producers’ water resources were cut by 40 percent to 60 percent and they could not fully meet their vines’ water demand,” Vinpro consultation service manager for the wine industry, Francois Viljoen, said in a statement.

South Africa which produces 3.9 percent of the world’s wine, harvests its winelands between February and March.

Western Cape dams were only 34.6 percent full last week compared with 50.4 percent in the same period last year, according to local government statistics that show a steady annual falls from 2014 when they were 90 percent full.

White and black frost damage in the Breedekloof, Robertson and Worcester regions could also hurt the 2018 harvest. Paul MakubeSenior, agricultural economist for FNB Business, estimated harvests would be 10,000 to 15,000 tonnes lower in those areas.

“If you have a lower crop the prices are going to be higher and it will eventually be passed on to the consumers,” said Makube, saying any price rise would depend on the harvest size.

Global wine production in 2017 is also set to fall to 246.7 million hectolitres – its lowest since 1961 – further supporting prices, after harsh weather in western Europe damaged vineyards, the Paris-based International Organisation of Vine and Wine (OIV) said in its estimates in October.

(By Tanisha Heiberg. Editing by James Macharia and Edmund Blair)