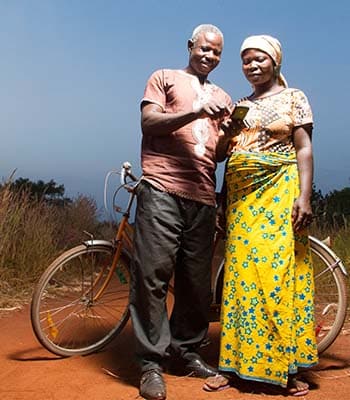 A Swedish company has developed an innovative application that is delivering accurate GPS-based weather forecasts to farmers in six African countries.

Since the beginning of 2016, more than 80,000 farmers in Ivory Coast, Ghana, Mali, Niger, Nigeria and Senegal have put Iska Weather to use. The app has generated more than six million weather forecasts.

The forecasts, which the developer said are more than twice as accurate as those provided by other models, help farmers determine the optimum times to sow, fertilize and harvest their crops.

Enoch Addo, a farmer in Ghana, said the application has already helped him double his cocoa production from 10-15 bags of cocoa to more than 30. “Because I was able to spray fertilizer and pesticide at the right times, I collected more than 30 bags of cocoa.”

Obtaining accurate weather forecasts have become more and more critical for African farmers as many parts of the continent grapple with drought and severe weather attributed to climate change.

Ignitia, the Swedish company that developed the mobile weather forecasting service, wants to expand the service to other West African countries using a grant of $2.5 million from the governments of the United States, Sweden, South Africa and the Netherlands.

The goal is to connect 1.2 million small farmers with the service by the end of 2017. Eventually, the company plans to offer the service in 20 countries in Africa, Central America and Southeast Asia.

Lizzie Merrill, Ignitia project manager, said the company’s forecasting model is more than twice as accurate as others, which typically are inaccurate more than 60 percent of the time. For farmers in the dry climates of sub-Saharan Africa, even a slight change in weather can results in significant losses, she said.

“Traditional global weather models have only been able to predict weather in the tropics with 39 per cent accuracy – not good enough,” she said.

Ignitia says its model has a weather prediction accuracy rate of 84 per cent since it launched as a pilot in Ghana in 2014.

Peter Okoth, an agronomist and soil scientist at Newscape Agro Systems Ltd. in Kenya, said governments in tropical nations have failed to invest in programs to provide accurate weather forecasts.

Okoth said Iska Weather could be used in other dry parts of Africa and that governments would benefit from because farmers could produce and earn more.

Support for better forecasting tools could “bring a big change on how farming is conducted and managed on the African continent,” Okoth said.

Yields of small-scale farmers in sub-Saharan Africa are among the lowest in the world, resulting in food insecurity, poverty and low economic growth. Estimates of crop losses in the region because of weather range from 20 to 80 percent.

Ignitia’s tool provides two-day, monthly and seasonal forecasts to farmers via SMS in a text-light format, which can be received on the most basic mobile phone. The forecasts are tailored to each farmer’s specific location by an automated tool that pulls in the closest GPS coordinate for each subscriber.

The farmers are charged four cents per day for the service. They can pay in micro-installments using pre-paid credits and it is easy to opt out. The service is delivered in partnership with telecommunications companies in each country.

The forecasting service typically accounts for less than two percent of their total expenses, according to Ignitia. The expense is more than offset by increased income, the company said.