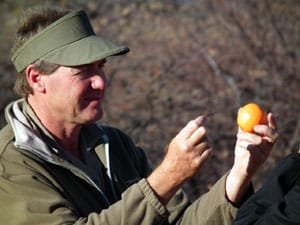 Namibia has launched an ambitious $2 billion effort to restore depleted grasslands that are critical to the southwest African nation’s economy. More than two thirds of the population of Namibia depends on grasslands for its livelihood. But drought, erosion, overgrazing and the encroachment of bush have drastically reduced the profitability of lives
tock farming. Experts estimate Namibian cattle farming is losing $100 million a year. At the same time, experts predict that production of course grains, which are used to feed livestock, will drop by nearly one-third in southern Africa by 2030. The projection lends urgency to Namibia’s effort to maximize feed available on its rangelands. Leon Lubbe, chief rangeland researcher of the Namibia Rangeland Management Policy and Strategy, said the goal of the project is to improve both the nutrient cycle if the land as well as the water cycle in order to halt degradation by 2030.

The project also seeks to restore biodiversity by nurturing key plants, practicing erosion control, reclamation of denuded rangelands, and “managing rangelands for heterogeneity rather than for homogeneity,” Lubbe said.
The restoration effort, launched in 2012, is expected to take 20 years. According to the World Bank, livestock and meat production along with fisheries, tourism and mining, are major contributors to the Namibian economy – all of which are cyclical and are vulnerable to the effects of climate change, including drought. Namibia has a population of nearly 2.5 million and a gross domestic product of $11.5 billion in 2015.
Namibia also has been hard hit this year by its most severe drought in more than two decades. The president of Namibia declared a state of emergency in June amid reports of crop failures and dying livestock. Business owners in the capital of Windhoek were ordered to cut water usage by 30 percent.

In addition to water shortages, the encroachment of bush on grasslands is a significant challenge for livestock farmers.
More than 70 million acres of Namibian rangeland are endangered by high-density bush.
Government-sponsored programs such as the De-Bushing Advisory Service are helping cattle farmers clear bush with training and advice on appropriate techniques and equipment as well as practices for maintaining the land and preventing the brush from returning once it is cleared.
Another promising experiment focuses on converting bush to cattle feed. A cooperative project of Namibia and Germany is testing practices in two Bush-to- Feed pilot projects. The tests are incorporating encroaching bush with other supplements to produce affordable cattle feed.

A few commercial farms have already begun producing feed from bush. Organizers say Bush-to- Feed has the potential to be replicated throughout Namibia as an immediate response to severe drought in tandem with brush-clearing efforts to secure the range land in the long term.
The typical process involves harvesting the encroaching bush, milling the biomass and mixing it with suitable supplements in order to increase the nutritional content and digestibility of the feed.
Typically the projects use bush species including Acacia mellifera, Dycrostachys cinerea and Rigozum trichotomum.
While production costs are currently high, ongoing research is expected to develop more efficient practices once the pilot projects are completed in May 2017.
Experts from Namibia and around the world are expected to share best practices for reclaiming the nation’s grasslands in September during a three-day meeting of the Coordinating Unit for the National Rangeland Management Policy and Strategy.
The efforts hold potential to turn around Namibia’s struggling livestock industry, which has seen declines in recent years. A 2013 drought saw the number of cattle drop from 2.9 million to 2.6 million while sheep umbers dropped from 2.7 million to 2.2 million.

Like Africa, Environment Namibia fights to save grassland, livestock industry