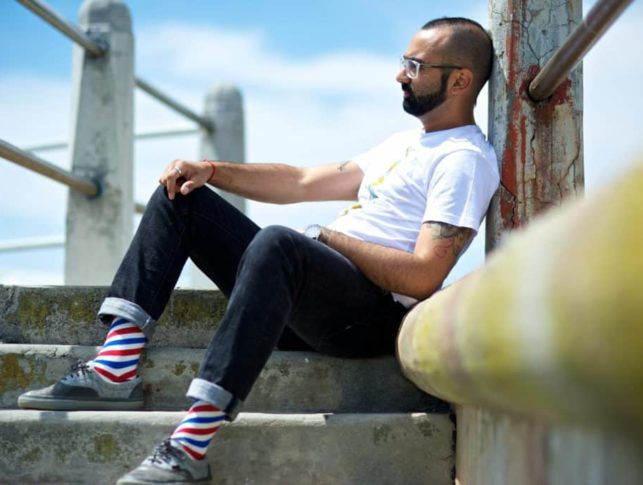 Serial South African entrepreneur Nicholas Haralambous has hit it big with a line of colorful designer socks that are sold in 20 countries around the world.

Haralambous, who is in his early thirties, got the idea for the business after buying brightly colored imported socks years ago. He did not like the quality or the design. After selling a tech venture he had founded, he used the some of the proceeds in 2012 to launch Nic Harry, a fashion venture that produces the socks and other men’s accessories.

The Cape Town entrepreneur considers socks the foundation of a classy wardrobe for men who may have limited options for accessories. Men should dress “from the ground up,” Haralambous said.

His best-seller is The Barbershop sock, which is popular in 10 countries. The company has produced about 70 designs with more than 60 in stock.

Socks sell for as little as $10 a pair. Buyers can subscribe to buy one or two pairs of socks each month and the company also offers early access to new designs and loyalty pricing.

In addition to socks, the company sells accessories including scarves, ties and pocket squares.

Haralambous said the subscription model is the first in South Africa.

He said Nic Harry is his tenth business venture in a decade – and he said he has learned a lot from failure.

He didn’t intend to be an entrepreneur. He studied journalism, philosophy and politics at Rhodes University in Eastern Cape and took jobs in talk radio and newspapers.

But he had started his first business while in school, at age 19, and he left the Mail & Guardian to join a start up called Zoopy. He also co-founded Motribe, a mobile social network builder. Motribe was his most successful venture before Nic Harry and Mxit, the mobile messaging giant, bought the company.

With no business training, Haralambous said he mostly learned by trial and error.

Perseverance is critical to success

“Build, fail, learn, and repeat,” he said, emphasizing that successful entrepreneurs will need to persevere in the face of many obstacles. “You’re going to face hardship. If you want the long-term benefit you need the short-term pain and risk.”

He said it is important to see problems as puzzles to solve rather than as roadblocks.

He said he started the accessories company with about $400 he made from his previous business and increased it to more than $2,000 within six weeks.

While many doubted he could build a successful company, Haralambous persisted. He found a manufacturer who could make samples at reasonable cost. He put photos online. Within a month, he had sold more than 1,000 pairs in South Africa and farther afield in the United States and France.

He said his success carries a lesson for fellow entrepreneurs in his country because it shows it is possible to build a valuable enterprise with only a small amount of money.