A new capital for Egpyt 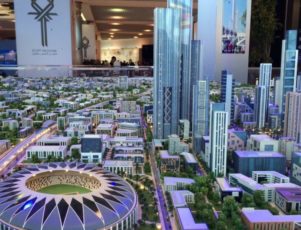 The Middle Eastern nation builds a new capital near Cairo as it seeks to boost its economy and house a growing population.

Egypt is moving forward with plans to build a massive $45 billion new city east of Cairo that will function as the nation’s government and business capital.

Planners said the new city, which does not yet have a name, would be home to 2,000 schools and colleges, 600 health care facilities, a central business district with hotels, shopping centers and offices, and 20 residential districts with housing for at least five million residents.

Covering more than 250 square miles, or an area slightly larger than the City of Chicago, the new city will also have an international airport larger than London’s Heathrow, an amusement park four times the size of Disneyland and a public park larger than Central Park in New York City.

The plan for a new city is a centerpiece in President Abdel Fattah Al Sisi’s efforts to boost Egypt’s struggling economy. Sisi, who seized power three years ago in a bloody military coup, has proposed several mega-developments amid a slowing of tourism and direct foreign investment in the Mideast nation.

Planners say the project will create more than one million jobs and take about 12 years to complete.

Egyptian Housing Minister Mostafa Madbouly said one goal of the development was to ease congestion and crowding in Cairo. The city of 18 million is expected double in 40 years.

The Egyptian parliament and its government departments and ministries, as well as foreign embassies, would move to the new city, he said.

“We are talking about a world capital,” Modbouly said.

The project got a boost earlier this year when Chinese President Xi Jinping visited Cairo to boost economic ties and announced the Asian nation’s willingness to support construction of the new city. China agreed to support the new capital project with loans, grants and other support that state media reported were worth $15 billion.

China also agreed to loan Egypt’s central bank $1 billion to increase its reserves, which stand at $16 billion, less than half the reserve at the time of the ouster of former President Hosni Mubarak during Arab Spring in 2011.

The new city is a showpiece for China’s “One Belt One Road” strategy to strengthen the country’s global position with foreign aid and investment. The strategy has prompted China State Construction to accelerate its international contracting work, building apartment houses, stadiums, roads and hotels in Africa and the Middle East.

The first phase of construction of the new capital city began in April, including development of roads and communications and sanitation infrastructure on the desert site 30 miles east of Cairo.

An Egyptian-Chinese partnership that includes Arab Contractors, the Petroleum Projects and Technical Consultations Company and the China State Construction is working on the initial construction.

Modbouly said the country would also be seeking bids from private companies for portions of the first phase. Chinese companies will provide financing for the construction of a number of new buildings, including 14 government buildings and a large conference center. Estimated cost of the initial phase is $2.7 billion.

According to China State Construction, the initial phase will include a parliament building, a national meeting center, exhibition halls and offices.

Prior to Chinese involvement, the development bogged down last year over disagreements about costs and how long it would take to complete the new capital. A United Arab Emirates company that had been announced as the lead developer pulled out as Egypt cancelled its contract citing “lack of progress.”

According to The Wall Street Journal, some experts are skeptical of the project.

“Egypt needs a new capital like a hole in the head,” said David Sims, an economist and urban planner who has studied development in Egypt.