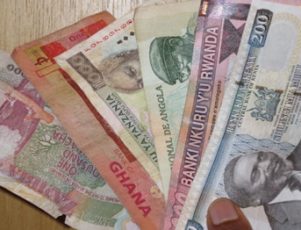 As currencies across the African continent fall against the dollar, the International Monetary Fund stated that the financial sector should brace itself for additional volatility. The IMF warned Wednesday in a semiannual assessment of risks to the global financial system, that the fallout from the end of “easy-money policies” by central banks could decelerate global economic expansion, reveal inflated asset prices, and further strain overextended lenders. Several factors contribute to the decline, including a trend by international investors to abandon emerging markets.

MSCI’s primary emerging equity fell 1.4 percent, declining to a one-month low, and Asian shares with the exception of Japan lost 1.6 percent. China led with a 2.75 percent rout on stocks. India, among the best equity performers this past year, realized its lowest daily fund outflow as of Wednesday. Resultant currency declines included record lows in several countries, including South Africa’s rand, Zambia’s kwacha, Uganda’s shilling, Tanzania’s shilling and Ghana’s cedi. The zloty and forint also fell sharply against the rising euro. China, by far the leading investor in African frontier markets, led this trend due to predicted increases in US interest rates which have yet to materialize.

Neil Shearing, head of emerging markets research at Capital Economics, stated that, “It is a bit of a bloodbath in equity markets. There are several things going on … the rise in oil prices, inflation expectations. Bond yields globally, including in emerging markets, have gone up and equity markets have come off the boil.” In some countries economic indexes are below the crisis levels set in 2008. Symptoms of global decline have been first observed in more volatile emerging markets.

China’s influence cannot be exaggerated. China’s decelerating growth struck fear among investors in emerging markets, from South Africa all the way to Malaysia. Equal with the fortunes of the world’s second-largest economic force, China’s financial grumbling reaches into pockets around the globe. Following an Asian recession and market meltdown, the Beijing government supported its own economy and stock market with a liquidity injection, but emerging market currencies cannot rely on such support. As a result, African markets now feel the domino effect.

African governments are taking stopgap measures to stem collapses. Nigeria, Africa’s top economy, froze its foreign exchange market, but this had the repercussion that it’s Naira was excluded from the influential JP Morgan bond index. The new currency crisis is increasing government debts as well, which reduces ability to comply with debt forgiveness specifications. Compliance failure could further jeopardize economic stability in many countries. Bond issues reveal yet another hedging mechanism already in play.

Bonds, commodities, and currencies are all near 16 year low figures. Stephen Bailey-Smith of Standard Bank Group Ltd. said, “Everyone’s putting on a helmet and just hoping to get through the day. African Eurobonds have been hit harder than average because they’re perceived as being more commodity-dependent.” Kenya’s shilling dropped 0.3 percent to 103.7 per dollar, the lowest closing since October 2011. And finance ministers claim that selling dollars on the currency market to compensate is not effective because speculators will quickly respond. African markets may have an opportunity to rally if the US Federal Reserve holds interest rates steady. Without a specific catalyst, African currency markets may be headed for a very long decline.