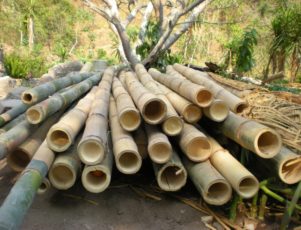 Bamboo farming could provide many African states with a green and lucrative industry.

If you asked the average person on the street to name a country that they associated with the bamboo plant, it’s unlikely you would hear many answers other than China. However, Africa has extensive bamboo reserves that the continent could reap huge rewards from.

What makes the prospect of harvesting the continent’s bamboo reserves particularly exciting is that the benefits offered are not solely economic. While the bamboo would indeed provide a veritable gold mine of revenue to many nations, it is also an opportunity to try and slow down the deforestation that threatens Africa’s myriad environments.

The issue of deforestation is obviously not confined to Africa, but many African countries are particularly at risk from the environmental impact that the practice brings. Cutting down large areas of forest contributes to a cycle of drought and pollution, especially as it leads to soil erosion which has been a primary factor in some of the disastrous famines that the continent has faced.

What makes bamboo so much better? According to Dr. Chin Ong, a retired professor of environment science, bamboo holds soils together, utilizes less water than trees and offers a greater overall package. Ong told the New York Times, “You want firewood; you want to reduce erosion, to maintain the water supply, generate cash and employment. Bamboo comes the closest — it gives you the most things.”

Bamboo is technically a grass, which means after a harvest it regrows and does so quickly. In fact bamboo can grow an astonishing meter per day, and it absorbs almost twice the amount of CO2 that is taken in by a tree.

A crop that is rapidly replenished, reduces pollution levels and does not damage the fertility of soils when harvested is clearly an environmentalist’s dream.

But do the numbers add up on the commercial side? The short answer is yes.

The International Network of Bamboo and Rattan (INBAR) is an intergovernmental body that works with the UN and has valued the global bamboo trade at $60 billion.

Thus far, 18 bamboo growing African states have joined INBAR as they look to make the most of their natural resources without devastating the local eco-system to do so. According to the United Nations Environmental Program (UNEP), bamboo has over 2,000 uses and China claims that if the plant is processed, this number rises to 10,000!

Despite such a glowing profile, the industry has yet to really take off in the majority of the 36 African nations where it grows. Adal Industrial PLC is a company trying to raise awareness and interest to help develop Africa’s bamboo farming. CEO Adane Berhe summed up the current problem facing the bamboo trade in Africa when he spoke to CNN saying, “The farmer who has bamboo is rich, but he doesn’t know it.”

One African nation that is investing in the industry is Ethiopia. Not only is Ethiopia rich in bamboo, with 2.47 million acres of it untapped, but due to widespread deforestation, the government has taken drastic steps to promote sustainable harvests and green industries.

The government has banned producing charcoal from hardwoods and has welcomed investment from China and other nations seeking to grow the bamboo trade.

INBAR now has an office in Addis Ababa and local people and small farmers have embraced the opportunity.

State Minister for Agricultural and Rural Development, Mitiku Kassa says, “Ethiopia has the resources, the investment, a rapidly-developing manufacturing industry and a strong demand for our bamboo products…The expansion of Africa’s bamboo sector has begun.”

As Ethiopia’s bamboo industry begins to grow, the hope is that other nations take note and follow their lead. The early signs are promising as the membership to INBAR continues to expand with new African members; there is patently interest in what the plant has to offer.

China has already offered investment in Ghana and a recent bamboo project there opened up 1,500 jobs.

The chief research scientist at the Forestry Research Institute in Ghana, Andrew Akwasi Oteng-Amoako told IPS news, “We anticipate a revival of investment interest in Ghana’s bamboo industry in the near future thanks to Ethiopia’s success.”

With recent government decrees from Rwanda and Nigeria on the importance of looking into utilizing bamboo resources, the future of Africa’s “green gold” looks promising.