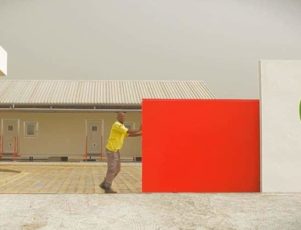 Bel Group, the third largest cheese-maker in the world increases sales and production on the continent, including a new pre-fabricated factory in Ivory Coast to produce The Laughing Cow cheese.

The French cheese-maker, which also has production plants in Morocco and Algeria, has found a growing market in Africa, selling more than two billion single-serving portions of Laughing Cow cheese in 2015.

The new plant in Abidjan, which began production in December 2015, was designed, assembled and tested at Bel Group’s research center in Vendome, France before it was shipped as a kit to the Ivory Coast in 14 containers. The factory was constructed “like a Lego,” said Bel CEO Antoine Fievet.

Before designing the plant, Bel Group spent three years figuring out how to miniaturize its production process so that it could prefabricate plants as it seeks to grow its local operations in key markets where import processes are expensive or cumbersome.

The Abidjan plant, located in the industrial area of Yopougon, will produce 100,000 portions of cheese daily for sale in Ivory Coast, Bel said. The 4,200-square-meter plant, which cost $3.4 million, can manufacture 20 million cheese servings annually.

“This unique plant once again demonstrates the expertise of Bel in miniaturization and the innovation capacity of our industrial teams,” Hubert Mayet, Bel director general of industrial operations and technology, research and innovation, said.

Mayet said the plant employed 12 people with an expansion to 20 planned for 2016.

Bel will import raw material for producing cheese, Bel said. “If success is to go, we can easily increase the size of the plant and will launch other products,” Fievet said.

In addition to the new plant in Ivory Coast, Bel employs a total of 3,500 people in factories in North Africa and Egypt. Bel Group also has operations in Turkey and Iran, and the company operated in Syria until civil war broke out.

In Morocco, Bel cheese is the market leader, selling brands including The Laughing Cow, Kiri and the Children.

The company in August 2015 acquired a nearly 70 percent stake in one of Morocco’s largest dairies, Salfilait, which processes and sells fresh milk and dairy products under the brand name Jibal.

Bel Group CEO Antoine Fievet said “Bel is proud of its success in Morocco built with the help of historical local partners. The group welcomes this new partnership with renowned a Moroccan industry and responds fully to its strategic development goal.” He called the two companies “close cousins.”

Bel has operated in Morocco since the 1970s with a plant in Tangiers that employs about 1,500 people.

In Algeria, Bel employs about 1,000 people at a production facility in Algiers. It established the operation Bel Algeria operation in 2001.

Bel is the third largest cheese-maker in the word after Lactalis and Kraft.

Founded in 1865 in France, Bel, now headquartered in Paris, has 28 production plants worldwide and distributes its products in 133 countries, including 44 countries in Africa. According to Bel, 400 million consumers globally partake of its cheeses each year and 10 million portions are consumed each day. In addition to The Laughing Cow, major brands include Kiri, Mini Babybel, Boursin and Leerdammer.

Bell also launched operations in the United States, opening a plant in Brookings, South Dakota with capacity to produce 20,000 tons of cheese a year in order to meet strong U.S. demand for Mini Babybel cheese. Bel Groups sales in the United States increased by 40 percent between 2013 and 2015.

World-wide, the company reported sales of nearly $4 billion in 2014, an increase of more than 20 percent from the year before.

In 2015, Bel reported a revenue increase of nearly 6 percent to nearly $4.2 billion.

International markets accounted for much of that group with increases of 29 percent in the Americas and Asia. Net income increased by 50 percent to $205 million.

Bel said about 63 percent of the company’s growth in volume came from Africa in 2015, which saw an increase in sales of 8 percent on the African continent, generating $475 million in revenue.

The company has operated in Africa for more than 50 years and sees the continent as a further growth area for sales.

”Bel is already a leader in Africa, but the continent still offers numerous untouched markets worth exploring,” the company said.