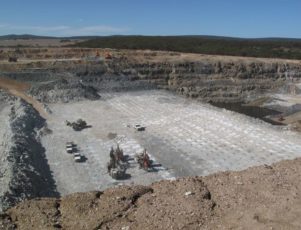 As global demand for lithium skyrockets, Zimbabwe may increase production of the so-called “white petroleum’’ that powers rechargeable devices including telephones and automobiles.

Tesla’s plans to mass-produce its Model 3 battery-powered car have stoked worldwide demand. Tesla estimated its production target for electric cars alone – 500,000 vehicles by 2020 – could require as much lithium as is already currently being produced.

Zimbabwe, the fifth largest producer of lithium on the planet, could increase its share of a growing market.

Premier African Minerals has begun looking for partners to expand its Lithium and Tantalum mining operations at its Zulu Project in Zimbabwe.

Premier’s flagship mine is the RHA Tungsten Mine in Zimbabwe and the company has mineral projects across Africa.

Meanwhile, another company, Prospect Resources Ltd., has secured diamond-drilling services for its recently acquired Arcadia Lithium Project in Zimbabwe. The project has set a target of extracting up to 18 million tons of 3-5 percent lithium.

The company said it has raised $2 million of $16 million needed to fast-track exploration.

During intermittent production between 1954 and 1972, the Arcadia mine produced more than 15,000 tons of mixed ore that contained lithium. The mining operation, just 25 miles northeast of Harare, also produces eucryptite, petalite and feldspar.

Zimbabwe is the world’s fifth largest producer of lithium after Australia, Chile, Argentina and China. Other major producers are Brazil, Portugal and the United States.

Such projections are driving investor interest in lithium, which was the only commodity to increase in price last year. The cost has skyrocketed to $6,400 per ton globally and reportedly to as much as $13,000 on some orders in China.

Increased lithium production could be a boon for Zimbabwe’s struggling mining sector.

The Chamber of Mines of Zimbabwe told a recent conference of mining executives that the sector is fragile because of low mineral prices on global markets.

The depressed prices, combined with liquidity challenges as well as power and capital shortages, have resulted in many mining companies struggling to break even.

The sector produces 10 percent of the nation’s gross domestic product and 50 percent of its foreign direct investment and export earnings.

Toindepi Muganyi, president of the Chamber of Mines, told delegates at the Mining, Engineering and Transport conference that the sector had contracted by more than 2 percent for the second year in a row in 2015. Total mineral revenue dropped from $1.9 billion in 2014 to $1.86 billion 2015, he said.

In addition to interest in lithium, prices for gold, platinum and nickel were on the rise, Muganyi said, predicting a recovery this year.

The Zimbabwean government in 2014 announced plans to build a lithium processing facility, which could lead the way to manufacturing batteries in the country.

Valentine Vera, metallurgy director in Zimbabwe’s Ministry of Mines and Mining Development said the metal had the potential to drive the nation’s economic growth as global demand grew. However, Vera said the country would need to draw significant investment in order to increase production.

Zimbabwe is a mineral-rich nation with resources that include platinum, gold, nickel, copper, zinc, lead, limestone and phosphates. The country has the second-largest deposits of platinum in the world.

Exploration for lithium is also under way in Mali. Birimiam Limited, a multi-commodity exploration company has significant interests in lithium deposits as well as gold deposits in the West African nation.