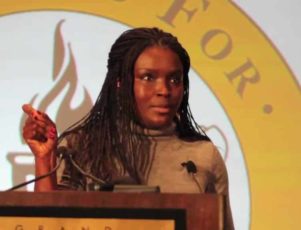 39-year-old Senegalese entrepreneur Magatte Wade, who made her name in Silicon Valley, has brought the love for her continent and her business flair together to bring the world a taste of African soul and the world to Africa.

Walking away from a $32 million business to create her second company in 2009, Magatte Wade is no stranger to making hard decisions, shunning the easy route and following her instincts. Five successful years went into Adina World Beverages before her departure, a company whose concept blossomed from a much loved yet rapidly disappearing traditional Senegalese drink, bissap, made from hibiscus flowers. The brave entrepreneur left behind Adina World Beverages not because it hit difficulties or became financially unviable, but rather due to a realization that her beliefs were no longer in sync with those of the other key stakeholders.

Now the founder and CEO of Tiossan, which produces luxury, organic skincare products, she brings traditional Senegalese recipes to the global beauty and health market, selling online, in high-end boutiques across the US and in their Hudson, New York, based store. Tiossan gives 10% of all profits towards creating innovative schools in Senegal.

“Use the power of brands to change perceptions”

As an entrepreneur Wade saw the disappearing bissaps’ marketing value but more than this, her experience had taught her that branding is the opportunity to tell a story and she had one she wanted to share.

During her first TEDex talk in 2011, the young Senegalese spoke of brands creating a culture. At the time over 50% of the Top 100 World Brands were American and not a single one African. She observed that American culture is in all our everyday lives and she concluded, “America has succeeded beautifully in exporting its own culture,” it being one of the most sought after worldwide.

To Wade this means building a powerful consumer brand of Africa’s own, to put it on a platform to engage on a global level and subsequently having a say on world issues. There are solutions and Africa can be part of it. “I want my continent to be an economic and cultural power.” Rather than sitting waiting for the next trend to come from America, she said “we can change whole world’s problems by addressing those in the US” first. Selling America healthier drink alternatives like bissap, to reduce obesity levels, was a clever example.

As a girl, she ran free until the age of eight in her Senegal family compound. Always the instigator of fun hunting and fishing trips, she led a pack of boys with her on her escapades, leadership skills she now draws upon greatly.

From her grandmother, who was her main caretakeruntil she went to join her parents in Germany, she was given a “tremendous feeling of confidence and boundless opportunity”. These attributes, she says, taught her more than anything she learnedat school.

Arriving in Germany, school came as a cold slap of new reality. The rigidness she felt from those initial days would follow her to France, where she studied from the age of 10 until 20 and attended PSB-Paris Business School, which lefther seeking to inject more warmth, humanity and soul into the business world. She made connections while on an exchange program to Indiana and moved there in 1997, before finding her way to Silicon Valley nearSan Francisco.

It appears her grandmother was onto something when she told her she had “something” special and “something”special to give the world. Ranked first in Forbes 2014 ”20 Young Builders of Africa of Tomorrow” as well as a Young Global Leader by the World Economic Forum at Davos, the list of impressive accolades goes on.

A woman of Africa and a visionary for her continent’s future, she remains humble and good humored. About that run-in with the Nestlé heavyweight, it was his un-gentlemanliness that allowed her to gracefully side-step a technical question she didn’t have the means to answer. It was “scarier than the day I ran into a pride of lions on the Okavango. And just as beautiful.”