Seven African countries have seen increased risk of default while only one has improved in the past year, according to a new report by the credit insurer Coface.

Only four African countries – Botswana, Mauritius, Morocco and Namibia – received an A rating from Coface, signifying an “acceptable” average probability of corporate default.

Seven countries were rated B with a “significant” average probability of default. The remaining 32 countries rated a C or a D, reflecting high or very high probability.

Ivory Coast was the only African country rated as improving, although Coface put it on a positive watch rather than a full upgrade. Coface downgraded risk ratings for Algeria, Gabon, Madagascar, South Africa, and Tanzania, while Zambia and Namibia were placed on a negative watch.

The oil glut figured heavily in Coface’s downgrades for Algeria and Gabon.

Algeria’s rating went from A4 or a “quite acceptable” probability of default, which denotes some economic weakness, to B, a “significant” probability reflecting an uncertain economic and financial outlook.

Algerian economy will expected to slow

“Algeria remains highly dependent on the energy sector which accounts for 30 percent of its GDP. The problems faced by the hydrocarbon sector due to its lack of competitiveness and the obsolescence of its production equipment lead to the conclusion that if the oil market remains low Algerian energy production performance will stay weak in 2016.”

Gabon’s rating dropped from B to C, denoting a “high” average probability of default.

Like Algeria, the country has seen its oil revenue drop dramatically and its economic growth decline sharply. The report said economic activity was expected to “pick up as of 2016 thanks to election spending, the natural resources sector (agri-business, gold and manganese mines, wood processing) and the services sector.”

According to the report, global oil prices may decline by another $5 to $15 per barrel in the coming year. Non-OPEC production will decline, particularly U.S. shale oil, the report said. However, with economic sanctions lifted, Iran will bring additional oil to market – it has 30 million barrels in reserve and could increase production to 700,000 barrels a day.

In South Africa, the report cites the nation’s recent financial crisis, higher interest rates, government deficits and political instability as factors. South Africa’s rating went from A4 or a “quite acceptable” average probability of default, which denotes some economic weakness, to B, “significant.”

South Africa’s worsening economic was thrown into an uproar late in 2015 when President Jacob Zuma abruptly fired a respected finance minister and then fired the replacement amid public protests.

With the value of the rand plummeting, South Africa worst drought in decades is putting even more pressure on the nation’s economy. The report said “agriculture, which was badly hit by drought in 2015, could again suffer as a result of El Niño in 2016.”

Tanzania was downgraded from B to C, or “high” probability of default.

The east African nation has in the midst of a political standoff that has disrupted trade for several months. It began after the mainland government annulled an election in semi-autonomous Zanzibar, which the opposition party claimed to have won. New elections are planned in February but the opposition has threatened a boycott.

Madagascar has also suffered political unrest since a coup in 2009. Its rating went from C to the lowest possible grade, D, signifying a “very high” average probability.

The report said Hery Rajaonarimampianina, who took power in the coup and was democratically elected president in 2013, “lacks the support for implementing reforms, with popular discontent taking the form of increasing numbers of protest movements and strikes.”

In addition to Algeria and South Africa, five countries are rated B: Benin, Cape Verde, Kenya, Senegal, and Tunisia.

In the Middle East, Israel, Kuwait, Oman, Qatar, Saudi Arabia, and the United Arab Emirates received A ratings while Bahrain and Jordan were rated B. Coface gave C ratings to Egypt and Lebanon. Iran, Iraq, Libya, Syria and Yemen were rated D.

“However, cheap oil, the weak euro, ad the slow decline in unemployment should not detract from the many sources of possible risk this year, with political risk foremost among them,” the report said.

The report underscores the risks as more investors turn their attention to the continent. Despite the challenges, investor interest in Africa has grown in the past decade, with an estimated $4 billion raised in 2014. Private equity investment in Africa amounts to about 1 percent of the global total. 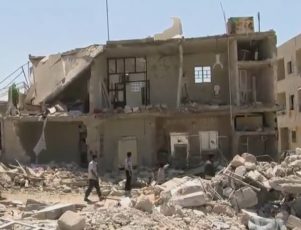