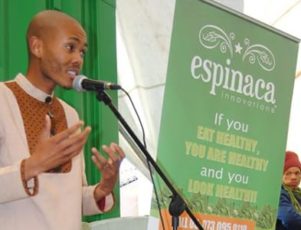 A young South African entrepreneur has built a business in healthy baked goods that has earned him the nickname of “Spinach King.”

He launched the business in 2012 with only 40 Rand (less than $3) in his pocket. Fast forward to 2016 and he operates Espinaca Innovations, which includes a bakery in a renovated shipping container, a café and bakery, and plans for a large-scale bread factory to open in August.

Recognized by the South Africa Breweries Social Innovation Awards in 2014, Nomjana used about $6,000 in prize money to expand his business.

A lesson in entrepreneurship

But the young businessman insists that entrepreneurial thinking has been more important than money on his path to success.

“You’ve got brains and intellectual capital. That will actually open many doors for you,” he said.

Nomjana was just out of school and in his early 20s when he embarked on a business career. He was selling clothes door-to-door but realized he needed to learn more about business and finance if he was going to start a successful business.

“Although I had the ambition and discipline to be self-employed, things weren’t going well,” he said. “I didn’t know enough about stock control and cash flow.”

A five-month course in entrepreneurship taught him that he could build a business while helping people in his community, providing them with access to healthy food.

That is when he started thinking about spinach, which was growing in abundance at a community garden where he volunteered in Cape Town’s Khayelitsha Township, where he lives. “Spinach grows easily almost everywhere. It’s one of the most nutrient-rich vegetables with many healthy side effects.”

He looked up recipes on the internet, persuaded a neighbor to let him use her oven and his healthy, low-carb spinach bread was born.

He was unable to find investors for his idea. But he went ahead, using the neighbor’s oven at nighttime in exchange for paying for electricity and giving her a supply of bread.

Nomjana baked four loaves a night, then eight and then 16, the most he could produce in his neighbor’s oven.

Profits were small. But while he wasn’t making a lot of money at first, he was building a reputation. Soon, he found he could not keep up with demand.

In the beginning, “it was not about profits. I was building a brand, and educating people” about good nutrition, he said.

A breakthrough came in 2013, when he asked Spar, a local retail chain, if he could use their ovens in exchange for supplying their stores with his baked goods. His production increased dramatically to 200 loaves a day. In addition to Spar, he could supply oven-baked spinach products to local offices.

He soon hired a small sales staff and – eager to speed up deliveries – launched a crowdsourcing campaign to raise money for five delivery bicycles.

By the end of 2013, Nomjana had saved nearly $3,000. With that money and his prize from the SAB Social Innovation competition, he bought his own baking equipment and renovated a shipping container as a bakery.

In 2016, Nomjana produces about 500 loaves daily of his popular low-carbohydrate “banting bread” along with other baked goods. He buys organic spinach from local farmers.

He believes he can increase production to 2,000 loaves once he opens a factory later this summer in nearby Stellenbosch.

At his new café, which also contains a bakery, customers can buy healthy, affordable meals such as gluten-free spinach bread and fresh butternut soup for about $1.

His experience has prompted Nomjana to advise other entrepreneurs to first identify resources they have – in his case locally grown spinach and a neighbor with an oven – before looking for investment.

It may make more sense to just get started with the resources available, the way he did.

“The first capital that you need, more than money, is intellectual capital.”