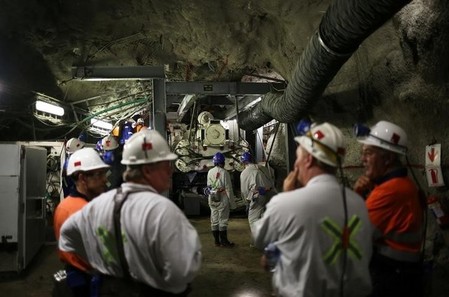 CAPE TOWN (Reuters) – It should be a match made in heaven. Developing Africa’s vast mineral resources to meet the needs of the resource-hungry economies of China and the rest of Asia.

But if there is one message to take away from this week’s Mining Indaba conference in Cape Town, it’s that there remains a large gap between hopes and reality, and that in much of sub-Saharan Africa mining investment remains challenging, if not in the too-hard basket.

In many cases, it appears that the various stakeholders in mining simply talk past each other, with mining companies pleading for regulatory certainty, preferably on favourable terms, and government leaders pushing their agenda that the industry must benefit all.

The main problem is that many African countries have what are effectively incompatible goals when it comes to developing their natural resources.

They want mining companies to invest billions of dollars to provide jobs and tax revenues, but they also insist that the same companies meet high hurdles relating to empowering various groups in the host country.

South Africa, the continent’s mining powerhouse, is a case in point.

The country’s mining charter calls for companies to have a minimum of 26-percent ownership by investors from the black majority.

In itself this is perhaps a sensible and justifiable position for the government, given how black South Africans were largely excluded from participating in the economy under the white-minority government’s policy of apartheid, which ended in 1994 with the negotiated transition to democracy.

However, in practice it means that any company considering investing in South Africa will effectively be forced to contribute 100 percent of the capital for only 74 percent of the profits.

Obviously this adds to the cost of doing business, and may just be enough to deter mining investment, especially when companies have the option of taking their money to other jurisdictions with less onerous terms.

The mining charter has prompted legal challenges in South Africa, and much criticism from the mining sector, with some company representatives at the conference this week privately expressing fears that the 26-percent black empowerment rule is likely only the beginning, and that the percentage that must be held by black investors may rise to something closer to 50 percent in coming years.

It’s not just South Africa that presents problems for mining companies, with other countries also shifting goal posts as they try to extract more benefits from their commodities.

The Democratic Republic of the Congo (DRC), the world’s largest producer of cobalt and a major producer of copper and diamonds, changed its mining code in 2012, doubling royalties and seeking larger free carry equity stakes, as well as local beneficiation quotas.

But opposition to these reforms meant the DRC government quietly abandoned them, but the fallout was that the country tarnished its reputation as a mining investment destination.

Ghana, a model for mining investment after its 2006 mining law attracted investors into its gold industry, decided in 2012 to raise a windfall tax on gold, but then didn’t follow through.

Other countries that have or are planning to change their mining laws include Zambia, Zimbabwe and Tanzania, reinforcing the continent’s image as a difficult place to do business.

The Fraser Institute survey of investor appeal tells the story, with the 2015 rankings placing South Africa 66th out of 109 jurisdictions, Zambia 68th and Zimbabwe 98th.

It’s not all bad news, with Botswana, a major diamond producer, ranking 39th and Ghana in 31st spot.

But the point is that African countries have to compete with Australia and Canada, which boast the top two jurisdictions of Western Australia state and Saskatchewan province.

While those are developed countries, other developing nations such as Chile, in 11th spot, and Brazil, in 56th place, offer stiff competition for mining dollars.

So what can African countries do to improve matters while still meeting the goals of getting mining to contribute more to the development of local economies and people?

The first step is to agree a regulatory framework and then stick to it, resisting the urge to tinker when commodity prices start to rally.

But it’s also important for governments and miners to recognise that what they have been doing simply isn’t going to work.

An example of innovative thinking could be that a government decides to raise the royalty rate on mining ore, perhaps to a level slightly higher than comparable jurisdictions, and then places the extra revenue in a sovereign wealth fund.

Such a fund could have a mandate to buy stakes in new projects, or to lend money to suitable local investors so that they might participate in mining ventures.

A well-managed and structured wealth fund would also go some way to cutting down on susceptibility to corruption, a problem that plagues the current systems of forcing companies to give equity stakes to local investors.

The risk for African nations is that if they don’t sort out their regulatory frameworks, they will continue to miss out.

Without improvement, it’s likely the only projects that will be developed will be either the absolute best, as they will be justifiable because of their superior economics, or the ones where dodgy deals can be secured through corruption or by mining without care for the environment.