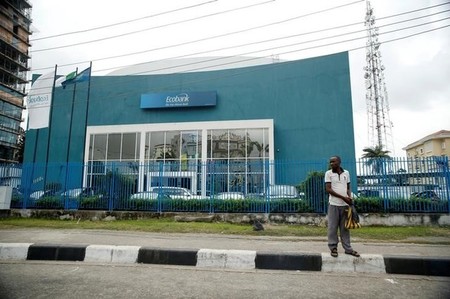 LAGOS (Reuters) – Africa’s Ecobank expects its new digital banking platform to help to boost its customer base across the continent to 100 million from 13 million by 2020, it said after announcing that it had signed up 1.5 million personal accounts through the mobile app.

Ecobank has operations in nearly 40 African nations, some of which have been pressured by the commodity price slide and unfavourable currency swings that have prompted the bank to strengthen its focus on the relatively stable consumer market.

“We have brought financial services to the mobile phone … to have instant account, payment and receipt across Africa,” Ecobank’s head of consumer banking Patrick Akinwunta said on Wednesday, adding that digital operations will also reduce the company’s cost base.

Shares in the bank were down 2 percent on Wednesday at 9.80 naira, having shed 2.7 percent so far this year. The shares fell by 39 percent in 2016 after a drop in nine-month pretax profit to $281 million in October from $398 million a year earlier.[nFWN1CY13Q]

Though Ecobank generates about 40 percent of its business in recession-hit Nigeria, where several lenders have adapted their business models after low crude prices put pressure on previously lucrative oil and gas loan books, Akinwunta said there potential for significant growth at low cost because only a third of Africans have bank accounts.