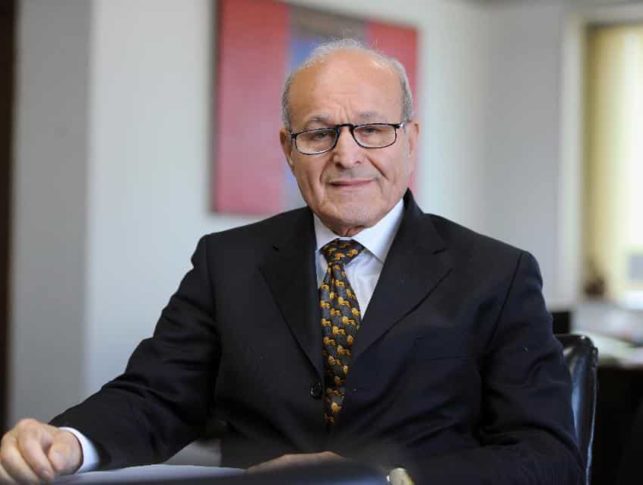 Originally trained to be an accountant Rebrab launched Cevital, Algeria’s largest private company and owner of one of the largest sugar refineries in the world as well as a string of companies in the country and abroad.

The son of revolutionaries who fought for Algeria’s independence from France, Rebrab became the country’s first billionaire in 2013. Forbes estimates his net worth at $3.4 billion, making him the ninth wealthiest person on the African continent.

Now 72, Rebrab came from modest beginnings. He completed accounting studies at a vocational school and started his career teaching accounting and business law. He went on to start his own accounting firm in 1968.

He followed a client’s advice to invest in the metallurgical construction business, and in 1971, he acquired a 20 percent stake in Sotecom, a metallurgic manufacturing company.

Rebrab later said it was a risky move, but “at worst, I knew I could always go back to teaching.”

His fortunes took a nose dive in 1995 when terrorist attacks destroyed his factories costing him more than $1 billion. He was then forced into exile to France.

Three years later he returned to Algeria to establish Cevital.

The company headquartered in Béjaïa is one of Algeria’s largest exporters in addition to providing products for domestic consumption, including sugar, vegetable oil and margarine. The sugar refinery produces 1.5 million tons annually. In 2012, Cevital produced 450,000 tons of oil for domestic consumption as well as quantities of liquid sugar for the country’s sodas industry. Cevital products are exported around the world, including to West Africa, the Middle East and Europe.

His other industrial interests include petro chemistry, steel, and naval and automobile construction. Rebrab is the sole Algerian enacting agent for Samsun Electronics in his country thanks to his subsidiary company named Samha .Cevicar another subsidiary is the sole agent of the car rental agency Europcar.

All five of his children now work in his businesses, which employ a total of more than 13,000 in Algeria.

Rebrab is betting that his country can compete with China for cheap labor. “We have huge potential; we can make up for lost time very quickly,” he said.

A string of investments in Europe, Sudan

He is also one of only a few Algerian businessmen that have expanded activities outside the country.

Rebrab has diversified his holdings by acquiring distressed companies in Europe.

In 2014, he acquired Groupe Brandt, a large maker of appliances based in France that had filed for bankruptcy protection. Cevital invested more than $200 million to build a Brandt plant in Algeria, which will employ 7,500 people.

Since 2013 the company has also purchased the Spanish aluminum smelter Alas Aluminum, the French assets of the Spanish household appliance manufacturer Fagor, and the Italian steelmaker Lucchini.

Cevital has also ventured south, with a 2014 agreement to invest $3 billion to develop production of sugar cane in Sudan.

Earlier this year, Rebrab agreed to buy the media group El-Khabar for $35 million. The newspapers is published in Arab-language publication with a circulation of more than 500,000.

The Algerian Ministry of Communication challenged the acquisition, citing a law that prohibits a company from owning more than one general news company Rebrab already owning the French-language newspaper Liberté.

In July, an administrative court of Algiers gave reason to the government and cancelled the sale of El-Khabar.