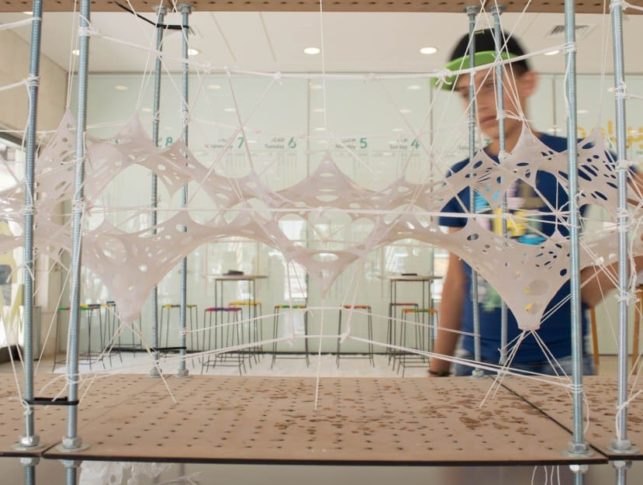 Jordan’s inaugural Amman Design Week showed that creativity could flourish even in times of change and challenges that include rapid urbanization and the influx of more than 600,000 Syrian refugees. Organizers said the design festival in the Jordanian capital of Amman drew about 30,000 visitors during a nine-day run that ended Sept. 9. It had the support of Jordanian Queen Rania Al Abdullah.

More than 100 designers, architects and artists displayed their work at the event, which also included a MakerSpace that offered classes in 3D printing. The event showcased creativity in a variety of artistic fields, including design, architecture, furniture, fashion, crafts, and digital media. In addition to exhibits, it included lectures, workshops, and tours. Sahel Al Hiyari, an architect who helped curate the exhibits, said design is a way to cross boundaries, whether mental or geographic. “When these boundaries are transcended, we get something more unified.”

The festival spread across three major locations with three dozen smaller exhibits, many of which reflected everyday life in Amman. For example, Sissel Tolaas, a scientist and artist, potted the city’s smells –everything from jasmine blooms to trash – and built a scent map. Another artist, Dina Haddadin, created displays using scaffolding and tarps used in construction.

The Hangar, one of the event’s main locations, draws visitors into a webbed textile funnel made from large knitted tubes that visitors can peek through. A collaboration between a local fashion designer, Raya Kassisieh, and an architect, Nader Tehrani, the funnel was knit by women in small communities all over Jordan. After the festival, the knitted wool was to be refashioned into blankets for refugees. Other noteworthy works include The Glass Shaper, a collage of glass stacked in front of a mirror that refracts light. Ahmad Jallouk, who runs a small underwear ship in Amman and spends his spare time turning glassware into art, created the display.

One of the most visible displays sat outside in a courtyard, a pile of curving watermelons that invited visitors to pose for photos while children ran through the stacks. Designed by Lebanese architect Hashim Sarkis and assembled to his specifications by two longtime Jordanian fruit sellers, the exhibit punctuated an important theme of Amman Design Week – finding surprise in everyday items.

The displays featured works from a number of other Arab countries including Lebanon, the United Arab Emirates, Kuwait, Syria, Bahrain, Iraq and Morocco. The event was a positive development at a challenging time for Jordan, which has seen a huge influx of refugees from the five-year conflict in neighboring Syria. Imad Fakhoury, Jordan’s minister of planning and international cooperation, said recently that the refugee population has put significant pressure on the country’s resources, particularly water, social assistance and finance, while curtailing tourism and foreign investment. The minister said the nation faces a shortfall of $2.8 billion in 2016-18.

Connecting talent is one goal

In addition to displaying deep and diverse creative talent to the public, Amman Design Week sought to raise the profile of designers and foster collaboration among them. Rana Beiruti, co-director of the festival, said she hoped the event would expose her fellow Jordanians to the tremendous talent of the country’s young designers and enable them to exchange expertise and ideas with regional peers.

Raya Kassisieh, a designer, saw an opportunity to raise the visibility of talent in the region. “Amman Design Week is an extremely important step to get the Levant area and Jordan specifically on the map of the design world. We are joining a really big movement and making a name for ourselves in the design industry internationally,” Kassisieh said. “I hope visitors from Design Week will help us spread the word about how much talent is at work in our region.”