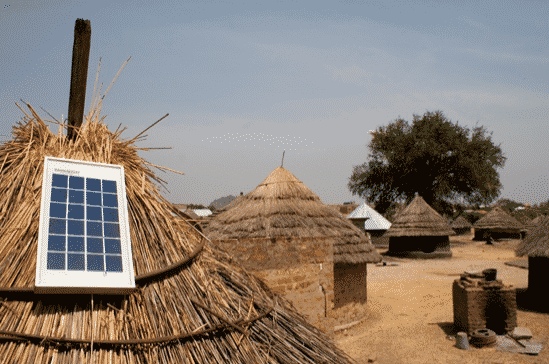 A British company is bringing pay-as- you-go solar power to rural communities in a dozen countries in East and West Africa with the help of artificial intelligence. With about 90,000 customers so far, Azuri said its PayGo solar system for communities that are too remote to access a power grid has the widest reach of any such provider in sub-Saharan Africa. Using artificial intelligence, Azuri said it has solved a significant problem with off-grid solar systems. On cloudy days, solar systems may not capture and store enough energy to provide electricity for the entire evening, causing frustration for users who may be watching television, doing homework, keeping a business open in the evening or charging their cell phones for the next day.

In addition to providing batteries and solar panels to customers, Azuri offers artificial intelligence technology that monitors each customer’s usage and slightly reduces electrical output to make sure power is not interrupted if the day’s supply is short. The reduction may dim the lights slightly, but it is barely noticeable, according to Simon Bransfield-Garth, chief executive officer of Azuri.

With this reduction, a battery that might only provide three hours of power at regular levels of output can stretch to four or five. People “want to be able to see at night. They’re less concerned about how bright the light is. They just want to be able to see,” Bransfield-Garth said. So the artificial intelligence technology figures out the customer’s average use then looks at the battery in the evening and adjusts the brightness of the lights so customers are “guaranteed to get that duration of light every night.” “It’s like the engine controller in your car that’s looking after all sorts of things in your engine,” he said.

So far, Bransfield-Garth said, the system has operated well in a diverse range of climates, from Ghana’s lengthy rainy season to Kenya’s abundant sunshine. “We have made technology that works in countries where there is a lot of sunshine and in countries where it is cloudier,” he said. Azuri’s pay-as- you-go system makes buying the package practical for many who would not be able to afford an up-front payment for the Azuri package. Using mobile payment services to buy credit on a weekly basis, customers typically pay for their equipment in 18 months, the company said.

Bransfield-Garth noted that off-grid electricity costs in Africa are much higher than power costs in the west. He said burning kerosene costs about $8 per kilowatt-hour compared to U.S. electrical prices of about 15 cents. Azuri’s system frees up those costs to cover the solar payments to individuals who may earn only two or three dollars a day. He said the Azuri system is much cheaper than traditional sources, which can cost as much as 30 percent of the income of poor families. According to Azuri, solar power is an effective and environmentally safe replacement for traditional sources of light, which include burning kerosene or candles or using disposable batteries.

A 2014 study of customers of Azuri’s PayGo system in western Kenya found that users expressed pride that they could provide electricity for their children to study in the evening. They also said they were saving money on charging their phones and saving more than two hours each week to go and buy kerosene. More than 85 percent said they had been able to work more since installing the Azuri system. Studying and phone charging were the most common activities, each cited by about a third of the customers. Other uses included cooking, working and socializing. The company, which is based in Cambridge, has an office in Nairobi and additional staff in five other countries.

Azuri also sells LED lights, mobile-phone chargers and MP3/radio players. The company also plans to offer a small television set with a satellite connection that can run on 10 watts of electricity. Bransfield-Garth noted that installing solar systems in remote areas has a significant social, economic and education impact as people become more connected and more productive. “On average, children spend two hours a day extra on homework when they have solar lights,” he said. “ It’s entirely normal for kids to go from mid-class to top of their class in three months just because they’re doing more studying.”