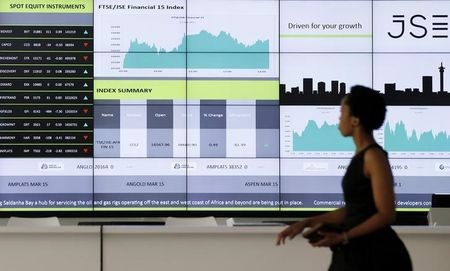 JOHANNESBURG (Reuters) – South African stocks rose to a more than two-week high on Tuesday, bolstered by bargain hunters and a recovery in oil prices from its lowest level in more than a decade, while the rand dipped in holiday-thinned trade.

“What we are seeing is a bit of buying before the close of the quarter,” said Sanlam Private Investments’ portfolio manager David Peacock. “Some stocks were oversold, so now we are seeing some nibbling [back].”

A recovery in oil prices from 11-year lows as investors unwounded some of their bearish bets on the battered commodity also helped boost stocks such as petrochemicals company Sasol, which rose by 2.61 percent to 393 rand.

Trade was light, with 153 million shares changing hands on the stock market, according to preliminary bourse data, well below the average of 183 million shares.

On the forex market, the rand weakened in shallow, range-bound trade following its brief relief rally ahead of the holiday season.

Trade is expected to be subdued for the remainder of the year as most domestic market players are on holiday, and with no major economic news to provide direction for the rand.

“We expect the rand to hover around R15/$ for the rest of the year,” said NKC African Economics analyst Bart Stemmet. “We see risks to the rand at its current levels to be balanced.”

Government bonds were weaker, with the benchmark paper due in 2026 adding 9 basis points to 9.445 percent.