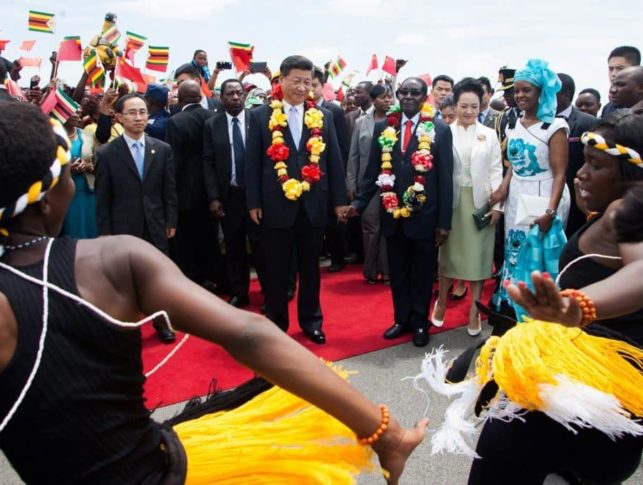 While much of the aid China provides to Africa comes in the form of investment and loans in infrastructure and economic development, Beijing has also given the continent dozens of government structures and sports stadiums. China promised in last August to the government of Zimbabwe a $46 million gift to build a new Parliament. The building will be located in Mount Hampden, about 10 miles to Harare, the capital. Zimbabwe’s Senate and House have grown to host a total of 300 representatives exceeding  the current Parliament’s building capacities.
The agreement between China and Zimbabwe was made official after the Forum on China-Africa Cooperation in Johannesburg in last December. The Chinese government also agreed to wipe out Zimbabwe’s debt to the country accounting for $40 million. Meanwhile, China has promessed to invest more than $1 billion in development of a thermal power plant in Zimbabwe. In return, Zimbabwe agreed to make the Chinese Yuan legal tender. Zimbabwe also abandoned its own dollar currency seven years ago after a period of hyperinflation and currently uses multiple currencies, including the United States dollar and the South African Rand.

Financial support to public services and government infrastructures have emerged as strategy from China to strengthen its ties to the continent by becoming Africa’s major investor and supplier in infrastructure projects. In 2012, China funded the Africa Union’s $200 million headquarters in Addis Ababa a strategic shift displayed as “China’s Gift to Africa.” The building, 100 meters tall, now dominates the skyline of the Ethiopian city. Most of the materials and furnishings were imported from China and more than 1,000 construction workers both Chinese and Ethiopian have worked on the project.

China also built an opulent presidential office complex for Mozambique’s government decorated with crystal chandeliers and with marble interiors. The structure that was opened in 2014 today overlooks Maputo Bay. However China’s financial input has never been disclosed. China has also donated $25 million for a new building to house the offices of the president and vice president in Uganda and provided furnishings from China. The building standing next to Uganda’s Parliament building was opened in 2011. In Sierra Leone, China has built a new foreign ministry, offices for its Parliament and a 100-bed friendship hospital outside the capital Freetown. China has also renovated government’s offices in Zambia.

The benefits of a “stadium diplomacy”

China has been devising a “stadium diplomacy” building more than a dozen sports venues on the african continent. Among them are the construction of Mozambique National Stadium which was built to Olympic standards at a cost of $80 million and offers seats to 42,000 spectators. I the same vein China evenly contributed to Tanzania and Malawi’s National Stadium. China also provided an estimated $600 million financial support to Angola to enable the construction of four stadiums to host the 2010 African Cup of Nations competition. For the 2012 African Cup, Equatorial Guinea built two stadiums with Chinese assistance while 2012 co-host Gabon enjoyed a gift from China of a $60 million stadium.

China has become by far Africa’s biggest trading partner, and more than one million Chinese laborers and traders have moved to the continent in the last decade. Trade value between Africa and China was estimated to $220 billion in 2014 and was expected to increase to $300 billion in 2015.  In 2014, trade exchanges with China accounted for 15 percent of total imports to Africa and 6.5 percent of its exports. As a matter of comparison that same year imports from the United States represented 5.5 percent and exports nearly 5 percent when India’s imports accounted for 6 percent and exports for  more than 8 percent.