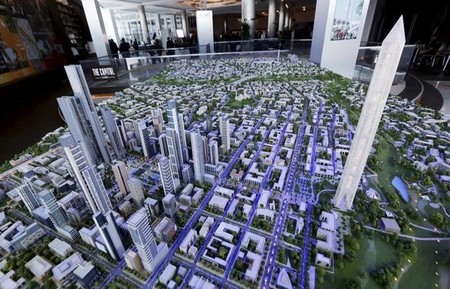 CAIRO (Reuters) – China Fortune Land Development Co. Ltd. (CFLD) has signed a deal to develop and manage 14,000 acres (5,700 hectares) of Egypt’s new administrative capital at a cost of $20 billion, the Egyptian cabinet said in a statement on Monday.

The development, which will include homes and offices and all relevant infrastructure, will take place in the second phase of construction of the new capital east of Cairo.

The new capital is one of a series of mega-projects announced by President Abdel Fattah al-Sisi designed to attract foreign investment and create jobs in a country with a booming population of 91 million.

Heralding a new era of closer political and economic ties, China in January signed 21 investment and aid deals worth billions of dollars with Egypt during a visit by President Xi Jinping.

Among the development and infrastructure investments was a deal to build the new capital’s first phase, which Egypt has said will cost some $45 billion.

The new capital, planned to be the size of Singapore, is due to have an airport larger than London’s Heathrow, a building taller than Paris’s Eiffel Tower, and more than 10,000 km (6,200 miles) of streets and avenues.