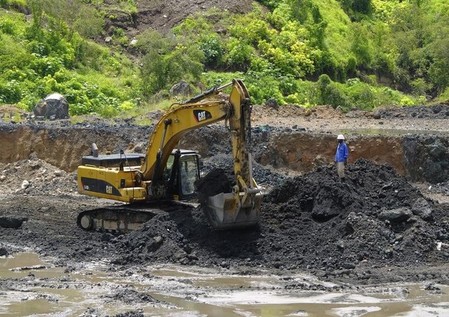 KINSHASA (Reuters) – Congo state miner Gecamines signed over its royalty rights at one of the country’s largest copper mines in January last year to an offshore company owned by Israeli billionaire Dan Gertler, according to a copy of the contract obtained by Global Witness and reviewed by Reuters.

The London-based advocacy group said in a statement on Tuesday that the lost royalties from the Kamoto Copper Co (KCC) project could cost heavily indebted Gecamines up to $880 million by 2030, about a fifth of Congo’s annual budget.

“It’s troubling that the state miner Gecamines has signed away rights to potentially huge flows of cash that should go towards building Congo’s future,” Global Witness said.

Gertler’s Fleurette Group, which holds a minority stake in KCC alongside its majority shareholder, Glencore, and Gecamines, confirmed in a statement that Africa Horizons Investment Ltd (AHIL), a wholly owned subsidiary of Fleurette, bought the rights from Gecamines but did not say for how much.

However, its statement called Global Witness’s report “damaging and defamatory”, saying Fleurette stands to lose money from the transaction owing to a fall in copper prices and KCC’s suspension of production in September 2015, both unforeseen events that occurred after the deal was signed in January.

“Global Witness is showing either a total lack of understanding of even the most basic business and valuation principles, or a brazen attempt to manipulate data to suit a pre-determined narrative,” a Fleurette spokesman said.

The Fleurette spokesman said the royalty rights acquired by AHIL expire in early 2019 – not in 2030, as Global Witness assumes in its calculation – pointing to a provision in the original 2008 accord between KCC, Gecamines and a Glencore subsidiary under which KCC’s payments of the royalties owed to Gecamines could stop in March 2019.

Global Witness said Fleurette “has not been able to show that the agreement will definitely end by 2019,” and called on it to publish the full terms of the deal with Gecamines.

Gecamines’ chairman and interim director-general, who both signed the deal, did not respond to requests for comment.

In a statement on the AHIL transaction, Glencore said: “KCC acted in accordance with the instructions it received from Gecamines and was not involved in the discussions between AHIL and Gecamines.”

Campaign groups have repeatedly accused Gertler of exploiting his friendship with Democratic Republic of Congo President Joseph Kabila to acquire mining assets at bargain rates before selling them at a mark-up – charges he denies.

Reuters was unable to determine if Gertler’s friendship with Kabila has played a role in his ability to procure mining rights in Congo. The minister of mines said only that he was unaware of the Global Witness report.

The Congolese government has repeatedly denied that their relationship gives Gertler privileged access.

It was not clear in the contract whether Gecamines received any compensation for ceding the royalty rights to AHIL, whose address in the contract is listed in the Cayman Islands, although Fleurette said it did pay an unspecified amount.

Glencore suspended production at KCC, the third-largest copper mine in Africa’s largest producer of the metal, in response to a global downturn in prices. It says it expects to resume production in early 2018.

As a result, Fleurette said, it expects to lose a significant amount of money on the deal.

Global Witness stood by its calculation of the value of the deal, saying it was based on information on the website of the Toronto Stock Exchange, where KCC is listed.

“This shows projected potential royalty payments for the life of the mine as totalling $1.596bn. Royalties are paid to the state at a rate of 2 per cent and to Gecamines at a rate of 2.5 per cent. Gecamines’ share of the total royalties amounts to approximately 55.6 per cent of $1.596bn, or $887m,” it said.

Gertler has been at the centre of several controversial Gecamines sales before. According to the Africa Progress Panel, headed by former U.N. Secretary-General Kofi Annan, Congo lost out on $1.36 billion in potential revenue between 2010 and 2012 in five mining deals involving Gertler.

He denied any wrongdoing in those deals.

U.S. authorities, which reached a $412 million settlement in September with the hedge fund Och-Ziff Capital Management LLC for its role in bribing African officials, said in the case that “an infamous Israeli businessman with close ties to government officials” paid over $100 million in bribes to Congolese officials from 2005 to 2012. A source close to the case at the time identified him as Gertler.

Gertler has long denied paying bribes and says his investments have contributed to Congo’s economic development.