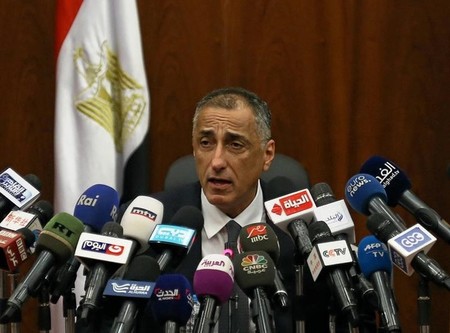 CAIRO (Reuters) – Egyptian Central Bank Governor Tarek Amer has said nothing would prompt him to intervene to prop up the pound after floating the currency in a dramatic move last month, calling those policies “history”.

Egypt abandoned its peg of 8.8 Egyptian pounds to the U.S. dollar on Nov. 3, floating the currency in a bold move that has since seen it roughly halve in value.

The sharp depreciation led to market speculation that the central bank would intervene in order to strengthen the currency and boost liquidity on the interbank market.

“Intervene? No. Absolutely not. This is history. There will be no intervention. Everyone was talking about us pumping in $2 billion or $4 billion. That’s not it. That runs exactly contrary to the idea we were implementing,” Amer said in an interview published on Thursday by business newsletter Enterprise.

“The market thought we would still need to support the new FX regime. No. We want this newborn child to start standing on its own feet and supporting itself.”

Ditching its currency peg helped Egypt secure a $12 billion three-year loan from the International Monetary Fund to support an economic reform programme under which the government has introduced Value Added Tax, cut electricity subsidies and sharply raised import duties, all in the space of a few months.

But the measures — the steep depreciation in the pound in particular — have reduced imports and dramatically increased prices in the country of more than 90 million people.

The pound was trading around 18 to the dollar on Thursday.

Bankers said on the day of the flotation they expected the central bank to inject $4 billion into the currency markets to stabilise the pound and clear huge backlogs in dollar orders that had built up under the peg.

Egypt has struggled to revive its economy since the 2011 uprising scared off foreign investors and tourists, key sources of foreign currency.

The central bank drained its foreign reserves shoring up the pound before the float, forcing it to ration foreign currency supplies, prioritising companies importing essential goods like wheat or medicine.

Everyone else had to trade on a booming black market. Existing foreign investors could not repatriate profits and potential investors held back, expecting a devaluation.

Amer told Enterprise the float was already paying off.

“Now, the market is rewarding Egypt for the float… portfolio investors in the debt market came almost immediately,” Amer said. “The stock market is up 35 percent from 3 November.”