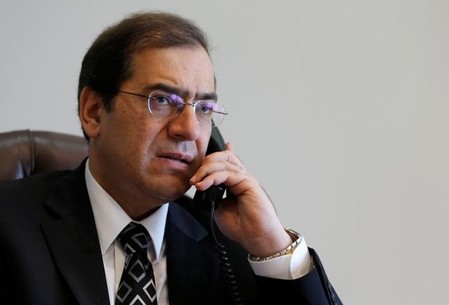 By Ahmad Ghaddar and Julia Payne

LONDON (Reuters) – Egypt is committed to repaying the $3.5 billion it owes in arrears to foreign oil companies but a foreign currency shortage has made the drawing down of those debts more difficult, Petroleum Minister Tarek El Molla said on Tuesday.

“We are committed and we will continue decreasing the numbers as we have done over the last three years,” El Molla told Reuters.

He said, however, Cairo was making monthly payments to foreign operators, enabling it to prevent overall debts from growing further.

El Molla said Egypt would resort to the spot market and to inter-governmental deals to close the gap between its gas production and consumption through imports of liquefied natural gas.

State-run EGAS issued an import tender in late October for 96 LNG cargoes for delivery in 2017 and 2018, with an option to buy 12 additional cargoes in 2017.

“Therefore, we’ll go on as we need and as it may require on smaller tenders or we might have some direct [inter-governmental] deals.”

Once a net gas exporter, Egypt turned into a major importer of LNG as growing demand outstripped production.

But the discovery by Eni of the giant 850 billion cubic meters Zohr oilfield in 2015 is likely to transform its fortunes.

The field is expected to come into production at the end of the year and will save Egypt billions of dollars in hard currency that would otherwise be spent on imports.

Egypt scrapped plans for a third floating and storage regasification unit (FSRU) due to plans to increase its natural gas production.

“We were able to squeeze the time, accelerate development then bringing into stream more gas, hence there’s no need for a third FSRU,” El Molla said.

El Molla said Egypt was still on track to conclude a contract with Iraq to import 1 million to 2 million barrels per day of crude from Iraq through an inter-governmental deal by the end of the first quarter.

The country will continue to go to the spot market to import oil products, however.

The move follows Saudi Arabia informing Egypt in November that shipments of oil products expected under a $23 billion aid deal had been halted indefinitely.

Egypt has long-term contract with Kuwait’s KPC to import diesel and crude oil, he said.