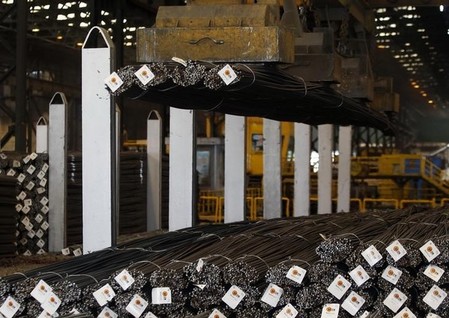 CAIRO (Reuters) – Egypt’s trade deficit has narrowed by $7 billion since January, Trade and Industry Minister Tarek Kabil said on Tuesday, adding that exports could rise by 10 percent – helping close the trade gap even more – if authorities devalued the local currency.

Pressure has been mounting on the central bank to devalue the currency as Egypt struggles to revive an economy hit by political unrest that has driven away tourists and foreign investors, two major sources of hard currency.

The central bank has been responding to the crisis by rationing dollars, giving priority to imports of essential goods and to exporters who need to import raw material for manufacturing.

Its policy of keeping the pound artificially strong has seen foreign currency reserves tumble to around $16.5 billion in August from $36 billion before a mass uprising in 2011.

“If and when a devaluation happens it will help trade on both sides, limiting imports and boosting exports … We expect it could boost exports by 10 percent,” Kabil told a Euromoney conference.

The central bank’s rationing of dollars has also led to a sharp fall in imports.

Kabil said Egypt’s imports had decreased by $6 billion since January while exports had increased by $1 billion, narrowing the trade gap by $7 billion.

For the January-June period the trade deficit came to about 173 billion Egyptian pounds ($19.5 billion), down 11.3 percent from the same period last year.