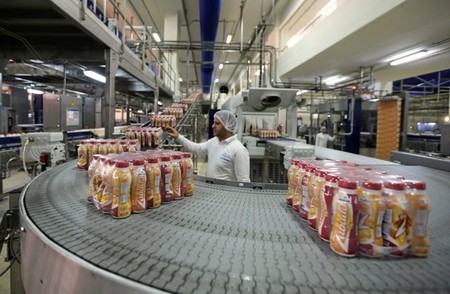 CAIRO, May 3 (Reuters) – Egyptian private-sector activity shrank at the slowest pace in nine months in April as output and new orders continued to decline, a survey showed on Wednesday.

The Emirates NBD Egypt Purchasing Managers’ Index (PMI) for the non-oil private sector stood at 47.4 points, up from 45.9 in March but remaining below the 50 point mark separating growth from contraction for the 19th month in a row.

New orders continued to decline but at a slower pace, with the related subindex reaching 46.3 points in April compared with 43.8 points the previous month.

New export orders grew for the first time in almost two years, at 51 points in April from 48.9 points in the previous month.

Egypt has struggled to revive its economy since a popular uprising in 2011 drove away investors and tourists, hitting inflows of foreign currency it needs to import raw materials and jumpstart its domestic industries.

It allowed its currency to float freely on exchange markets on Nov. 3, in a bid to unlock foreign currency inflows and encourage exports of Egyptian products.

“The slower pace of deterioration in the headline Egypt PMI… reinforces the perception that after bottoming in Q4 2016 the economic situation in Egypt is beginning to stabilize,” said

“As well as being the strongest overall reading in nine months, particular comfort can be taken from the fact that the new export orders index grew for the first time in nearly two years, which is likely to reflect the positive impact of a weaker exchange rate,” he added.

Output levels reached 46.2 points in April, up from 44 points in March.

“The rate of decrease (in output) eased to the slowest in nine months, but was marked overall. A number of monitored firms attributed the fall in activity to weak underlying demand and unfavourable economic conditions,” said Markit, which compiled the data.