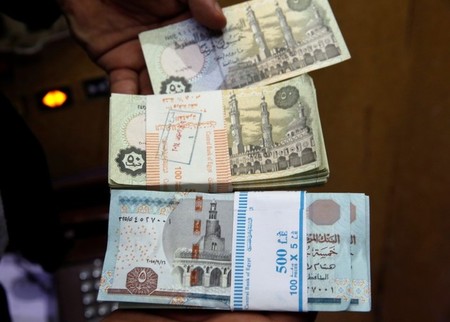 Banks were selling dollars at around 15.8 pounds per dollar on Sunday, stronger than Thursday’s rate of around 16 per dollar.

The central bank floated the currency and raised base interest rates by 3 percent in early November, encouraging the International Monetary Fund to agree a three-year $12 billion funding deal later that month.

“Importers have a pile up of goods. When the prices rose after the float, people’s purchasing power declined and sales in most (imported) goods slowed down and with it their demand for dollars to import more goods slowed as well,” one banker said.

Dollar inflows at banks have also increased as foreign investors, scared off by a revolution in 2011 that ushered in an era of instability, have begun to return, while dollar remittances from Egyptians living abroad have risen sharply.

Foreign investors, lured by high yields in Egyptian treasuries, entered the market in the past few weeks pushing yields lower.