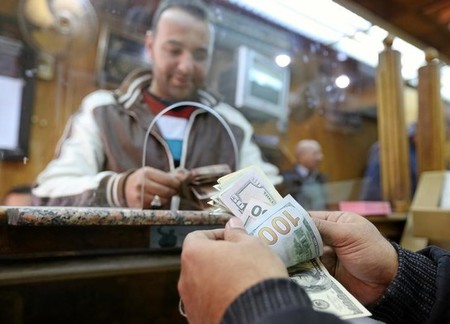 Egypt has been struggling with a foreign currency shortage since an uprising in 2011 drove away tourists and foreign investors, and had roughly $36 billion in reserves before then.

Egypt floated its currency in November as part of a series of economic reforms aimed at reducing the budget deficit and balancing the currency market. The move helped it clinch a $12 billion three-year loan from the International Monetary Fund.

The reserves were further supported, economists say, by a $2 billion repurchase transaction that the central bank secured with global banks last month. The transaction with a consortium of international banks has a maturity of one year.

“The central bank succeeded in achieving its target of $25 billion … The rise is strong and noticeable and would cover imports for more than five months,” Cairo-based CI Capital economist Hany Farahat said.

“The rise in reserves will restore confidence in the central bank’s ability to restore stability in the foreign exchange market,” said Farahat.

The country of over 90 million has been seeking a variety of funding sources, from development loans to foreign grants and aid, to plug its financing needs as it struggles with an acute dollar shortage caused by years of post-uprising turmoil. Like Latest Updates from Reuters Egypt’s foreign reserves rise to $24.265 bln at end-December