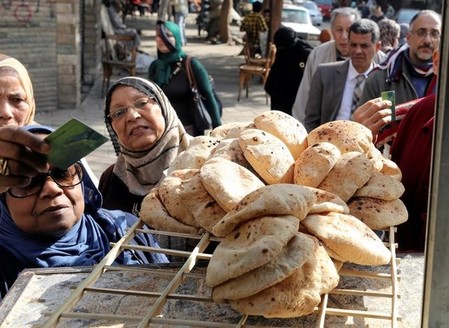 CAIRO (Reuters) – Egypt’s urban consumer inflation rose at a slower pace in March and core inflation dipped, the first signs of stabilising prices after the shock from a huge currency depreciation.

Urban inflation rose for the fifth consecutive month to reach an annual 30.9 percent, the official CAPMAS statistics agency said on Monday, its highest point in more than three decades.

However the rise from 30.2 percent in February was the smallest since Egypt abandoned its currency peg in November, driving up the price of imports.

The pound currency has since depreciated by roughly half and in Egyptian cities and towns, food and beverage inflation reached 41.8 percent year on year in March.

Annual core inflation, on the other hand, declined for the first time in eight months, reaching 32.25 percent in March from 33.1 percent in February, the central bank said in a statement.

Egypt abandoned its currency peg of 8.8 to the U.S. dollar on Nov. 3 but the pound has been stable around 18 per dollar for the past two weeks.

March’s annual urban consumer inflation figure is the highest since June 1986, when it reached 35.1 percent, according to Reuters data. However, monthly urban inflation eased to 2 percent in March from 2.6 percent in February.

The central bank accompanied the November float with a 3 percent interest rate hike to fight price pressures but inflation is expected to keep climbing as the government pushes on with economic reforms, including fuel subsidy cuts.