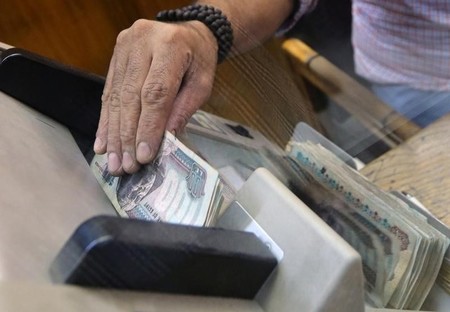 “The U.S. dollar is dropping like a rock,” one banker said. “Now we have the volumes and might close below 16 per dollar.”

Egypt’s central bank floated the pound a week ago, in a dramatic move that was welcomed by the business community.

It devalued the currency by about a third from its former peg of 8.8 against the dollar and has since allowed it to drift lower. A severe shortage of dollar liquidity when markets opened on Sunday for the first time since the float had resulted in low volumes and saw the pound weaken to 18 versus dollar.

It began to recover on Wednesday, after the IMF managing director, Christine Lagarde, said she would recommend that the executive board of the lender approve Egypt’s $12 billion loan agreement when it meets on Friday.

Egypt’s dollar peg had drained the central bank’s foreign reserves, forcing it to impose capital controls and ration dollars, and prompting desperate importers to turn to the black market for their needs.

Since the float, more companies have gone to the bank for their dollars, leaving them scrambling for funds while a lack of liquidity means interbank trading got off to a slow start.

The IMF announcement and the central bank’s $2 billion financing deal gave the markets hope that fresh inflows would be arriving sooner rather than later to stabilise the currency and ease what could be a painful era of austerity.

In a sign that confidence was beginning to return to the market after the float, average yields on six-month and one-year treasury bills dropped significantly at an auction on Thursday.

“There is strong buying appetite and positive sentiment with rumours of foreign investors entering the market,” another banker said, referring to the T-bill sale.