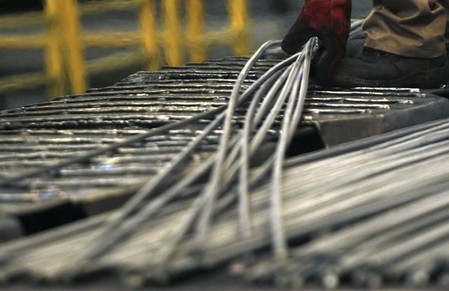 CAIRO, Dec 5 (Reuters) – Business activity in Egypt shrank in November, with the deterioration picking up pace for the fourth consecutive month, as weakness in the pound currency raised costs and hit output, a survey showed on Monday.

The Emirates NBD Egypt Purchasing Managers’ Index (PMI) for Egypt’s non-oil private sector dropped to a 40-month low of 41.8 in November, edging down from 42 in October and far below the 50 mark that separates growth from contraction. Egypt’s central bank abandoned its peg of 8.8 pounds to the U.S. dollar on Nov. 3, in a move aimed at attracting capital inflows and ending a black market for dollars that had all but crippled the banking system.

The move was largely welcomed by businesses, which had struggled to obtain dollars amid strict capital controls, and helped Egypt clinch a $12 billion loan from the IMF. But the currency has since depreciated to 17.8 against the dollar.

“The ongoing downtrend evident in November’s survey highlights that there will be no quick fixes to Egypt’s economic difficulties, even following the EGP devaluation earlier in the month,” said Jean-Paul Pigat, senior economist at Emirates NBD.

“In this environment, it is crucial that authorities remain committed to their IMF-supported reform program in order to anchor investor confidence.”

Following the float, Egypt received the first $2.75 billion tranche of its three-year loan from the International Monetary Fund, to help plug its financing gap and stabilise the currency.

The PMI showed purchasing prices continued to rise in November to their highest levels since data collection started, as the currency depreciated against the dollar and the government raised fuel prices.

Output fell substantially in November to 36.8. The pace was marginally slower than October’s decline but remained one of the most marked since data collection began in April 2011, with companies citing poor economic conditions, high prices and shortages of some raw materials.

The index showed new orders dropping to 36.3 – the fastest fall in 39 months – largely due to soaring inflation linked to the weakness of the Egyptian pound against the dollar. As companies sought to curb rising costs, rate of employment fell for the 18th consecutive month in November to 45.1 compared with 46.2 in October, data from the survey showed.