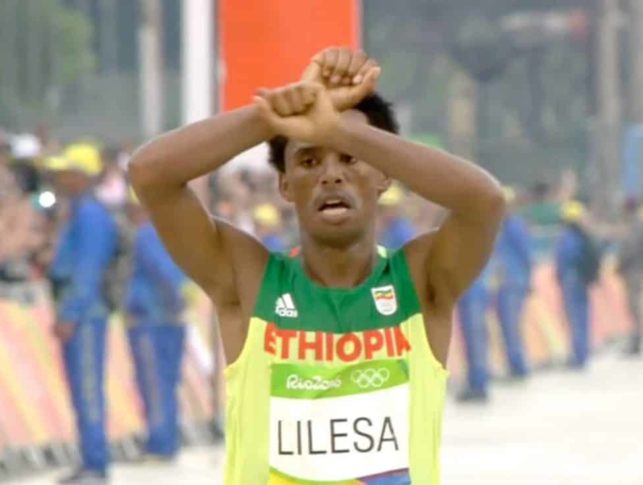 Feyisa Lelisa, the silver-medalist in the men’s marathon at Rio 2016, will probably never return to his homeland. Despite coming second with an impressive time of 2 hours 9 minutes, he claims he will not be welcome to return to Ethiopia. At the end of the race he made a finish-line protest in solidarity with his people, the Oromo.

This protest could cost him his life or his liberty if he returns, and he now fears for the family he has left behind. The Ethiopian government claim otherwise and insist he will return a hero, and that his family are safe. However, the state-owned media did not show him crossing the finishing line, instead focusing on the winner, Kenyan Eliud Kipchoge. Despite the administration’s protestations it is unlikely that they will treat him kindly. The government has a veritable record of drastic crackdowns in order to quash dissent. The most recent demonstrations in Ethiopia, led to the government shutting down the country’s internet for two days, in an attempt to deter further campaigns.

With the public spotlight now on the runner, his family and predicament, the Ethiopian government is forced to deny reports that he is in danger. Whether that would be the case without international scrutiny however, remains to be seen.

Protests in Oromia, over land and resources

Since November, over 400 protesters have been killed according to the Human Rights Watch. This figure has been strongly denied by the ruling party, the EPRDF. The government has no opposition in parliament and has strong ties with world leaders in Europe and the USA, which some commentators say allows the regime to operate under less scrutiny. Many Oromo feel that their situation is ignored by the world, and with no political representation in the government their needs are not met. President Obama has even recently praised Ethiopia’s economic development and has met with leaders from the EPRDF.

The Oromo make up over a third of the population in Ethiopia and have a long history of conflict and oppression by other ethnic groups. The most recent protests began in November 2015, sparked by plans to expand the boundaries of the capital, Addis Ababa, into the Oromo land boundaries. This has since been shelved but demonstrations have been held in increasing frequency over their marginalization and political treatment. Despite being the “breadbasket” of the country, it is the second poorest region. According to the MIF, 90% of the Oromo population lives in poverty, over 80% do not have access to electricity or sanitation and a shocking 75% do not have access to safe drinking water. The Oromo people feel excluded from progress and economic developments which have been focused around the capital, Addis Ababa in recent years.

Was this a worthwhile sacrifice?

Lelisa may have sacrificed his career for this political statement; most runners have a limited physical peak and an asylum process could take years. He felt strongly that he could not overlook the opportunity to appeal to the global community in his time in the spotlight. The runner told a nearby journalist after the race: “The Ethiopian government is killing my people, so I stand with all protests anywhere. I am protesting for my people”.

The protest has gone from a little-known political movement to an international debate. Over $130,000 has been raised via crowdfunding for Lelisa to be relocated and granted asylum abroad, probably to the USA. A legal team has been hired and is looking into ways to extract his wife and two young children from Ethiopia, to join him in his country of refuge.

Although political protests or symbols are banned by the Olympic charter, Lelisa’s decision seemed particularly apt considering almost all Ethiopian runners are ethnically Oromo. Their success is mostly disregarded by the Ethiopian Athletics Federation, potentially to downplay their achievements, and to stifle exposure for their cause. His medal-winning performance in the marathon was the perfect time for him to highlight the plight of his people.

With the spotlight on Lelisa and Ethiopia, he is likely safe for now. The money generously donated will provide him with legal consul and perhaps a new life in the USA. Once the Olympics are finished, will this exposure just have helped one Oromo runner, or will it actually instigate the action needed to benefit the whole Oromo population?

Like Africa, Sports Ethiopian runner protests for his people as he crosses the finish line at Rio 2016