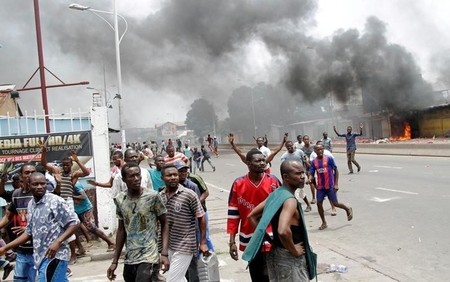 LUXEMBOURG (Reuters) – The European Union will prepare economic sanctions on the Democratic Republic of Congo unless its ruling coalition, which has delayed next month’s elections, holds a fresh vote early next year, diplomats say.

President Joseph Kabila was due to leave at the end of his mandate in December but authorities have postponed it until April 2018, citing logistical problems.

The vote delay sparked two days of protests in the capital Kinshasa last month that killed dozens of people.

“Elections must take place as early as possible, and no later than in 2017,” said an EU diplomat involved in the talks. “Given the situation, we are prepared to consider sanctions and work is already under way,” the diplomat said.

European Union foreign minister meeting in Luxembourg on Monday are expected to agree a statement in which they will make clear that travel bans and asset freezes are a genuine threat.

“The EU will use all the means at its disposal, including individual restrictive measures,” said a draft statement seen by Reuters that would target “those responsible for serious human rights violations, those who promote violence.”

Foreign ministers are expected to task EU foreign policy chief Federica Mogherini to draw up sanctions, which could be on senior police and other members of the security forces, potentially broadened to government officials at a later stage if there is no progress on an electoral agenda.

The European Union, a major donor of foreign aid as well as a big foreign investor and trade partner, is also seeking an independent inquiry into the violence last month and wants talks on a new timetable for presidential and parliamentary elections.

Former colonial power Belgium is pushing EU governments to reduce the duration of diplomatic visas issued to officials, having cut its own visas to six months, one diplomat said.

Kabila, who came to power in 2001 when his father was assassinated, says he will respect the country’s constitution but has yet to rule out attempting to change laws to enable him to run for a fresh term.

The presidents of neighbouring Rwanda and Congo Republic changed their constitutions last year to allow themselves to stand for a third term. Kabila’s opponents say they fear he will do the same.

Hundreds of people have also died since last year in Burundi, where the EU has also imposed sanctions, after its president Pierre Nkurunziza pursued and won a third term in office that his opponents say is unconstitutional.

The head of the U.N. mission in Congo warned last week that the political impasse poses an “extreme risk” to stability. Millions died in regional conflicts between 1996 and 2003 and Congo has never had a peaceful transition of power.