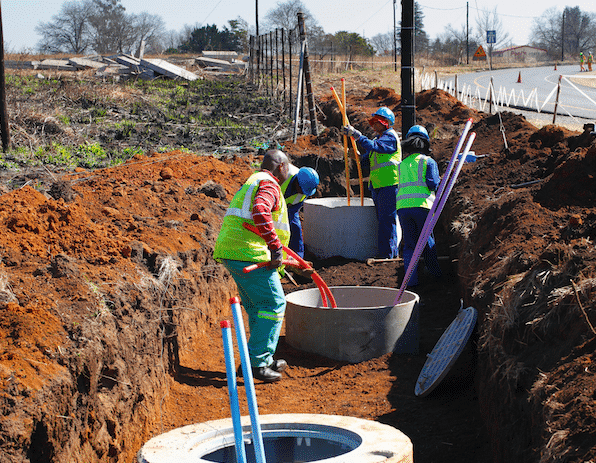 Pushing its nascent digital economy to catch up with its booming commerce, Ivory Coast is investing $165 million to lay more than 3,000 miles of additional fiber optic cable. The West African nation has already installed nearly 400 miles of fiber optic cables and planned to add another nearly 900 miles this year, according to Andre Augustine Apete, Minister of information and communications technology. When the work is completed, the country will have more than 4,000 miles of cable, about one-fifth of its goal of more than 12,000 miles. As Ivory Coast emerges from a decade of political turmoil, the government has adopted an ambitious agenda of investment in infrastructure that has driven economic growth to about nine percent during the past four years, one of the highest growth rates on the continent. While commodities-reliant economies elsewhere in Africa have slowed, Ivory Coast posted growth of 8.4 percent for its gross domestic product and projects growth of 8.5 percent this year, according to the World Bank. The country has seen large increases in overall production, particularly in agriculture, as a result of regulatory reforms, public investment programs and infrastructure development.

The world’s top cocoa producer, Ivory Coast has also experienced a boom in digital activity driven by mobile banking and shopping that total nearly $2 million profits a day, outpacing traditional banking. “I don’t think all our banks put together are doing as much”, Apete said. However, the government has more ambitious plans to grow the emerging digital economy, which today directly or indirectly employs about 150,000 people out of the country’s population of more than 20 million. Until recently, mobile access has dominated the marketplace with more than 85 percent penetration, while the internet and broadband sectors have been largely undeveloped in the Ivory Coast.

High international bandwidth costs played a major role in limiting development because the unique submarine fiber optic cable served merely Ivory Coast. With the landing of a second cable in 2011 and as many as three additional cables expected to be added, prices have begun to decline. Another major development in Ivory Coast was the introduction of 3G mobile services in 2012, with the launch of the first 3.5G mobile broadband service. The wide geographic reach promised by 12,000 miles of fiber optic cable is intended to position the country to develop a booming digital economy. Fiber optic cable is much less expensive than copper wire, and, importantly for digital communications and data, it has a higher carrying capacity and provide fastest broadband connexion.

Innocent N’Dry, head of new technologies, innovation and services development at Ubifrance in Abidjan, said the Ivorian government wants the country to become a regional hub for communications and information technology. The sector has seen sustained growth in the past decade, and it was one of only a few countries in West Africa that obtained 3G coverage by 2012. However, the lack of a fiber-optic network has held the country back at a time when technological entrepreneurship is emerging. “In terms of young companies and new technologies, there is real entrepreneurial dynamism, with the creation of incubators,’’ N’Dry said. He cited development of the Orange Technocenter in Abidjan, where marketing, research and engineering teams develop new products and services for the Orang telecommunication company’s customers.

Support for startups is key

N’Dry said Ivory Coast is emulating a model from Senegal in which the government provides support for young companies. To encourage new digital businesses, the Ivory Coast government implemented a free zone dedicated to information and communication technology companies. More recently, the government in July announced a fund of more than $260 million to strengthen the infrastructure for tech innovation and to support tech companies, especially startups. The fund, created with support from the African Development Bank, will also be used to help establish networks of investors and to train entrepreneurs from Ivory Coast and other countries in the region.

While the Ivory Coast government seeks to develop broadband capacity, it is also moving to encourage improvements in mobile services. This year, Ivory Coast will limit the number of operating licenses for telecoms to four. Three companies, which account for 96 percent of the country’s more than 20 million mobile subscriptions, will be re-licensed. They are France’s Orange, South Africa’s MTN and Mov, which was sold the Morocco Telecom by the United Arab Emirates’ Etisalat in 2014. At the same time, the government said it was withdrawing the licenses of several smaller mobile operators, stating that they had not paid for due taxes and fees. Apete said smaller companies might have the opportunity to merge into one single company controlled if a new majority shareholder emerges. “We are leaving this fourth place free in case a significant operator comes in tomorrow and says it’s interested. Those companies can then join with it”, Apete said.