Finance minister says South Africa not on the path to austerity 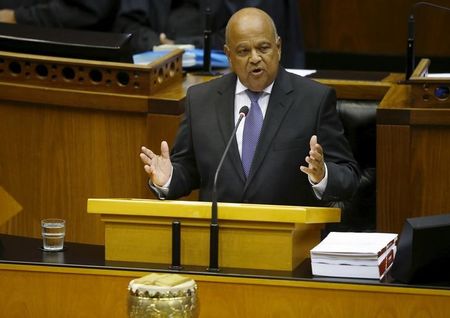 JOHANNESBURG (Reuters) – South Africa’s recent budget was not aimed at implementing austerity measures and would not go the same path taken by some countries in Europe, the finance minister said on Thursday.

Gordhan’s pledge to narrow the budget deficit to 2.4 percent of GDP by 2018/19 was aimed at placating ratings agencies that had warned of downgrades.

“We are nowhere near austerity. We haven’t cut anybody’s pension, we haven’t raised the retirement age, haven’t cut any jobs in the public sector. Austerity as it was applied in parts of Europe is not what we are trying to do here,” Finance Minister Pravin Gordhan said at a business conference.

On the reported dispute between himself and the South African Revenue Service commissioner Tom Moyane, Gordhan said the dispute would be resolved in due course.

The two men have clashed amid a probe into a unit which allegedly operated unlawfully in the department under Gordhan’s watch during his previous stint as commissioner.

South Africa’s rand currency fell nearly 4 percent on Friday, its biggest daily loss since 2011, after Gordhan said there were attempts to discredit him and the integrity of the Treasury through the investigation.

The investigation also led to media reports of a fallout between Gordhan and Zuma, which both men have dismissed.

“I will stick to my job and do the best I can,” Gordhan said.

“(We will) explain the budget to them and the kind of direction that we want to go in,” Gordhan said.