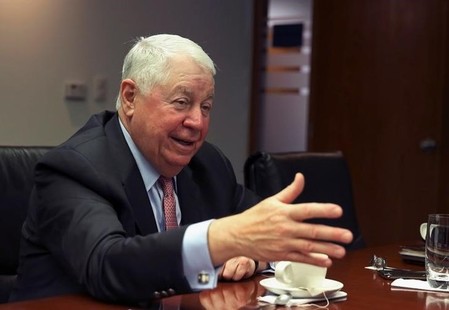 By Mitra Taj and Susan Taylor

LIMA/TORONTO (Reuters) – Freeport-McMoRan Inc said on Wednesday it had wrapped up the $2.65 billion sale of its stake in the Democratic Republic of Congo’s Tenke mine, and the company’s chief executive said he hopes negotiations will ease objections of Congo’s state miner to the deal.

The CEO, Richard Adkerson, told Reuters in an interview that the surprise victory of Donald Trump in the U.S. presidential election had triggered “fund buying” of copper, bringing the metal’s price closer to fundamentals in a market that he said was now “essentially balanced.”

Last week, benchmark copper prices recorded their biggest weekly gain since 2011, fueled largely by Trump’s promises of infrastructure spending. Copper is used in everything from wiring to construction.

Adkerson called the rally a “pleasant surprise” that could help the Arizona-based company – the world’s largest publicly listed copper producer – pay off its bloated debt sooner. A 10-cent rise in the price of copper in 2017 would translate into $300 million to $350 million in extra cash, he said.

“It’s too early, way too early” to consider any new expansions, Adkerson said, speaking in Freeport’s Lima offices ahead of a trade summit that Peru is hosting this week.

“There’s a lot of uncertainty about this near-term movement and where things are going,” Adkerson said.

It was also too early to say what Trump would mean for mining companies after taking office, Adkerson said.

As part of its efforts to lower its debt, Freeport announced in May that it was selling its 56 percent stake in Tenke to China Molybdenum.

But state miner Gecamines, which owns 20 percent of the mine, has opposed the sale, saying it was not informed beforehand of the plans and had the right to make the first offer on any sale.

Freeport’s deal had been delayed for months by minority mine owner Lundin Mining Corp, which had the right to supplant China Molybdenum’s offer, sell its stake, or do nothing.

That barrier was eliminated Tuesday when Lundin said it would sell its 24 percent stake to Chinese private equity firm BHR Partners for about $1.14 billion in cash.

Freeport was working with Gecamines to resolve their dispute and would prevail in arbitration if talks fail, Adkerson said.

Adkerson also said he was confident Indonesia would modify its planned ban on unfinished metals exports.

“They’re working on something,” Adkerson said. “I wouldn’t want to predict exactly how they do it, I’ll just say I’m confident that they’ll find a way for us to continue exports of copper concentrate.”

(Reporting by Mitra Taj in Lima and Susan Taylor in Toronto; Editing by Alistair Bell and Leslie Adler)