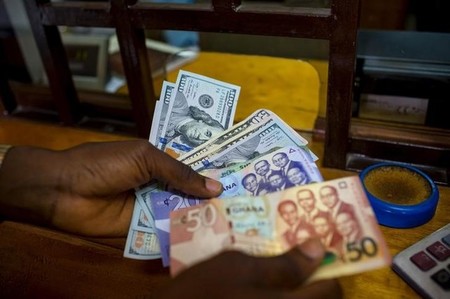 ACCRA (Reuters) – Ghana’s budget deficit is expected to fall to 4.9 percent of GDP this year against an initial projection of 5.3 percent, President John Mahama said on Tuesday in a speech to present highlights of the ruling party’s manifesto ahead of an election in December.

Gross domestic product is expected to grow more than 8 percent next year, compared with a projected 4.1 percent this year, he said.

Positive economic news is crucial for Mahama’s hopes of winning a second and final four-year term in office, given that the economy slowed sharply in the years after he came to power in 2012.

The slowdown was caused by lower global prices for gold, oil and cocoa exported by Ghana and a fiscal crisis that forced the government last year to begin a three-year aid deal with the International Monetary Fund.

Mahama is expected to face a tight contest against Nana Akufo-Addo, leader of the New Patriotic Party, which ruled the country for eight years until it lost an election in 2008.

“Our opponents have been seeking to belittle our achievements, claiming that we have benefited from more resources than any other government in our country’s history,” Mahama said.

“It is much easier to deny that anything has happened than to say that there’s been progress but that they can do better,” Mahama said. Like Latest Updates from Reuters Ghana budget deficit expected to fall to 4.9 pct this year: president