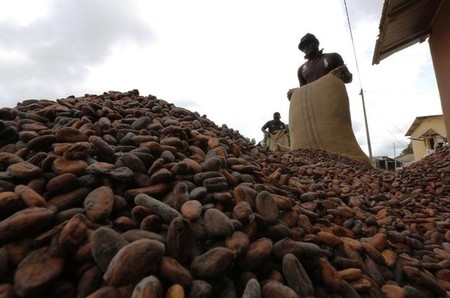 ACCRA (Reuters) – Ghana is seeking collaboration with Switzerland to boost its cocoa output and process more of the beans in the face of price volatility, President Nana Akufo-Addo said on Wednesday.

Ghana, the world’s second largest producer and top grower Ivory Coast, which together account for more than 60 percent of the world’s cocoa supply, have been hit by a sharp drop in world prices that have seen cocoa futures plummet by around a third.

While Ivory Coast responded by slashing its guaranteed farmgate prices, Ghana has maintained the price at which it buys cocoa from farmers since the season opened in October.

Ghana exports at least 70 percent of its beans mainly to Europe through forward contracts.

“Ghana, under my presidency, will no longer become mere producers and exporters of cocoa beans, and will continue the policy of processing more and more of our cocoa,” Akufo-Addo told reporters after a meeting with Swiss President Doris Leuthard in Accra.

Ghana, which also exports gold and oil is under a three-year aid programme with the International Monetary Fund to restore fiscal stability to its economy, dogged by high public debt, deficits and consumer inflation.