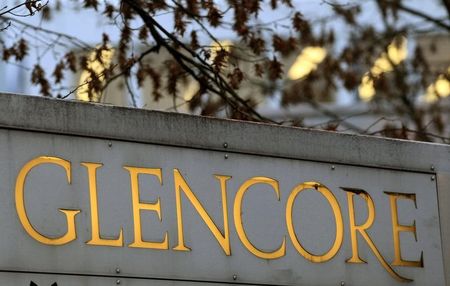 The London-listed company came under pressure to cut its net debt of $30 billion, one of the largest in the industry, as prices for its key products, copper and coal, sank to more than six-year lows.

Despite the rout in commodity prices, Glencore had said only last month that its cashflow was “comfortable” to service the debt, return cash to shareholders and support growth.

The market did not share this view, especially after Swiss-based Glencore lowered its earnings forecast for its trading division, an unusual step given the company’s track record for winning bets on trends in raw material prices.

Glencore’s shares tumbled last week, leaving them down 59 percent this year and adding to pressure on the team around Chief Executive Ivan Glasenberg, architect of its transformation from low-profile trading house to global commodities giant.

Glencore said on Monday it would cut net debt by a third by the end of 2016.It will sell assets and raise $2.5 billion in a share sale, with its billionaire directors diverting part of their wealth back into the business.

Shares in the company were up nearly 7 percent at 131.4 pence by 1254 GMT, having fallen almost 60 percent this year to a record low, a worse performance than rival miners like BHP Billiton and Rio Tinto.

In a sign of how pessimistic the market has become over the commodities outlook, most analysts praised Glencore’s decision to secure its balance sheet. Glasenberg said it followed “recent stakeholder engagement” – suggesting the share sale and other measures had been called for by shareholders.

“The move is entirely about preserving the group’s credit rating,” said an analyst at an institution holding Glencore stock. “Without a solid investment grade rating, the group’s marketing business could not participate effectively in its markets.”

Last week, credit rating agency Standard & Poor’s affirmed its long and short-term ratings on Glencore at BBB and A-2, but revised its outlook to negative from stable. It warned that it would lower its rating if Glencore were perceived as having a weaker commitment to defend the rating or if commodity prices fell further.

Glencore labours under a higher debt load than its mining peers in part because its trading unit uses borrowed money to take large positions that generate tight margins. Its net debt to EBITDA ratio of 4.5 times compares to a ratio of 1.4 times at BHP Billiton and 0.9 times at Rio Tinto, according to Thomson Reuters data.

Formerly just a commodities trader, Glencore surfed a boom in raw materials prices since the start of the 2000s driven by accelerating emerging economies to become a global mining giant. A 2011 flotation made multi-billionaires of several Glencore directors. In 2013, Glencore bought peer Xstrata for $41 billion.

Its biggest mining industry rivals have little trading presence and Glencore’s strength was seen to lie in a more diversified earnings stream.

So it surprised investors last month when it said first-half profit had slumped and tough market conditions were hurting its trading business. The company had previously said trading would meet earnings targets whatever happened to commodity prices.

Charles Stanley analyst Tom Gidley-Kitchin said Glencore’s reputation has taken a hit because they spent too much on expansion. He said it made some wrong trading calls and some poor investments such as Optimum Coal and Caracal Energy. But Glencore did not have the monopoly on bad decisions:

As it grappled with the downturn, cash generated by Glencore operations before working capital changes fell to $4 billion in the first half of 2015 from $5.6 billion a year earlier.

Glencore has already disposed of some non-core mining assets it inherited through its Xstrata takeover and has trimmed capital spending plans for this year and 2016.. But analysts had expected more cost savings.

Glencore said 78 percent of its proposed share issue was underwritten by Citi and Morgan Stanley, while its senior management have committed to take up the remaining 22 percent.

“It could be a rights issue, a placement or other forms of potential equity raising. Post discussion with our shareholders, we will have a structure that makes sense and it will be priced accordingly,” Chief Financial Officer Steve Kalmin told Reuters.

Glencore also said it had suspended dividends until further notice. It would not pay a final dividend for 2015, which would save about $1.6 billion, while around $800 million would be saved from the suspension of the 2016 interim dividend.

The company said it expected to raise about $2 billion from the sale of assets – including minority stakes in its agriculture business – and to save some $500 million to $1 billion from further cuts in capital spending by the end of 2016. It expects to reduce working capital by an additional $1.5 billion by the end of next June.

Glencore will also suspend some African copper production operations at its Katanga Mining unit in Democratic Republic of Congo and Mopani Copper Mines in Zambia for 18 months, removing 400,000 tonnes of cathode product from the market. Glasenberg said this move should have an effect on copper prices.

The company stuck to its forecast for the trading division to make an operating profit (EBIT) this year of $2.5 billion to $2.6 billion, adding: “(we) remain confident of our long-term guidance range of $2.7 billion to $3.7 billion”.

But there were calls for Glencore to reveal more of the workings of its powerful trading arm. It does not say how much trading profit comes from arbitrage, supply chain activities or directional bets and only discloses volumes marketed and overall profits, said Morningstar analyst David Wang.

“As such, we can’t distinguish what portion of the profits of the division are correlated with prices or the activities that should be less correlated with commodity prices,” he added.