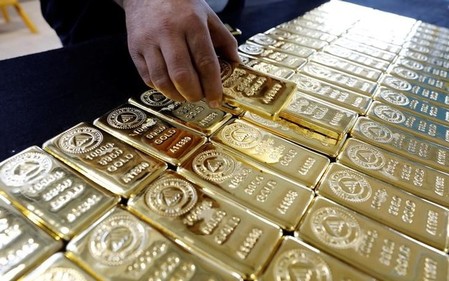 BENGALURU (Reuters) – Gold edged lower on Tuesday on a firmer dollar and equities as the market awaited cues on the path of interest rate hikes in the United States ahead of Federal Reserve Chair Janet Yellen’s testimony on Wednesday.

The market was looking ahead to Wednesday and Thursday as Yellen will deliver two days of testimony on the U.S. central bank’s semi-annual report on monetary policy and the economy.

Based on the minutes of the last Federal Open Market Committee (FOMC) released on July 5, Yellen may testify that the Fed will seek to reduce the central bank’s Treasury bond holdings and mortgage-backed securities by August, effectively tightening the supply of U.S. dollars. The FOMC also indicated in the minutes that another interest rate hike would happen later this year.

Bullion is highly sensitive to rising rates because they push up bond yields, increasing the opportunity cost of holding non-interest bearing gold. A higher dollar, in which gold is priced, would also lower the value of the yellow metal.

“If the (Yellen) commentary is a little more hawkish, it’s going to put a little more pressure on gold again and going by previous FOMC minutes, it’s probably going to be,” said MKS PAMP analyst Tim Brown, adding “a lot of it has already been priced in.”

“The rising dollar and rise in (Treasury) yields will continue to mount pressure on the gold and silver in the near term,” MKS PAMP trader Alex Thorndike said in a note.

Asian shares and the dollar were slightly higher on Tuesday. [USD/] [MKTS/GLOB]

Spot gold is expected to rise into a range of between $1,225 and 1,231 per ounce, as suggested by its wave pattern and a Fibonacci projection analysis, according to Reuters technical analyst, Wang Tao.

(Reporting by Nithin Prasad and Arpan Varghese in Bengaluru; Editing by Christian Schmollinger and Subhranshu Sahu)