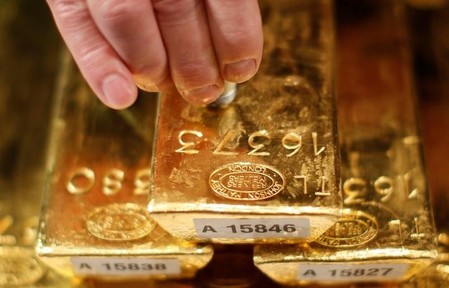 “We expect gold to trade with a bid tone in early Asia on safe-haven flows, following a series of North Korean missile launches this morning,” said Jeffrey Halley, senior market analyst at OANDA.

The dollar also dipped in Asian trading, as investors locked in gains after the greenback’s rise last week on growing expectations of a U.S. interest rate hike this month. The dollar index was down 0.2 percent to 101.39.

The U.S. Federal Reserve’s long-stalled ‘liftoff’ of interest rates may finally get airborne this year as policymakers from Chair Janet Yellen to regional leaders across the United States signaled that the era of easy money is drawing to a close.

Yellen capped off a seemingly coordinated push from the central bank when she cemented the view that the Fed will raise rates at its next meeting on March 14-15, and likely be able to move faster after that than it has in years.

Meanwhile, hedge funds and money managers boosted their net long position in COMEX gold to the highest in more than three months in the week to Feb. 28, U.S. Commodity Futures Trading Commission data showed on Friday.

(Reporting by Arpan Varghese in Bengaluru; Editing by Richard Pullin)