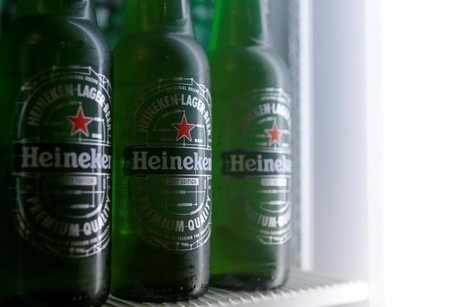 ABIDJAN (Reuters) – Heineken is planning to take on Castel for the top spot in Ivory Coast’s growing beer market by competing with the French company on price, the general manager of the Dutch firm’s new brewery said on Monday.

Following a decade-long crisis that ended in 2011, Ivory Coast has emerged as Africa’s fastest growing economy, according to the International Monetary Fund, and beer consumption is rising in the cocoa producing country of 23 million people.

Groupe Castel, a private firm founded by the Castel family, produces the majority of the 270 million litres of beer consumed annually in Ivory Coast at its Solibra brewery in Abidjan and has maintained an iron grip on the market for years.

Besides its ever-popular Castel, Flag and Solibra Bock brands it also brews other well-known beers under licence such as Diageo’s Guinness and Carlsberg’s Tuborg.

“The market has been served by a single actor, Castel, for years … We judged it promising enough to move in with this investment.”

For now, the Dutch company is focusing on producing its local Ivoire brand at the new plant, which has a capacity of 160 million litres a year, said Koch.

The recommended unit price for a 60 cl bottle of Ivoire will be 500 CFA francs a bottle, said Koch, which is lower than the rival brands produced by Castel, Africa’s second largest producer of beer and soft drinks.

Heineken has operations in 10 other African countries including Nigeria, South Africa, Democratic Republic of Congo and Ethiopia.