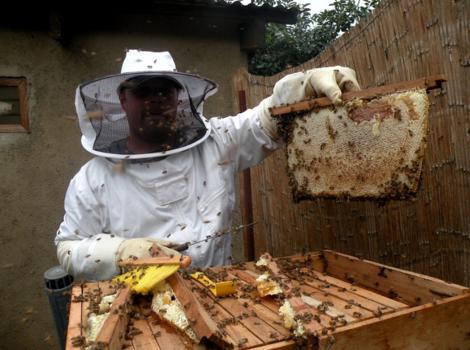 Stability is not a word often used to describe the status of small-scale farmers, particularly not those in Sub-Saharan Africa. African farmers are especially vulnerable to variable climates: should a rainy season arrive early or late, be heavier or lighter than anticipated, an entire community’s livelihood can turn to dust or be washed away in a flood. At the recent African Honey Exhibition, experts discussed the viability of beekeeping and honey production as not only a key to eradicating poverty for farmers, but as an industry that has a multitude of positive externalities, such as pollination.

The Buzz Around Town

Small scale investment has gained more traction as a viable development tool in recent years: from micro-credit enterprises in Bangladesh to projects focusing on African farm collectives, more money is being given in small scale projects than ever before. Agriculture is a challenging area in which to invest, particularly in a region now characterized by unpredictable weather, political turmoil and lack of connectivity between urban and rural areas. Beekeeping, or apiculture, has recently been identified as a potential agriculture venture that can thrive in the

African climate: in a 1990 paper for the Food and Agriculture Organization, Stephen Adjare wrote that beekeeping and honey production had long been occurring in Eastern Africa, but that they made use of antiquated techniques that inhibited expansion or growth. His points as to why Africa is ideal for beekeeping and honey production are now being echoed by development experts and economic advisors around the world.

Tropical apiculture is not only inexpensive, but it allows farmers to be self-reliant. It is not dependent upon the importation of expensive foreign equipment or experts, it does not require a beekeeper to own large amounts of land, as hives can be created on very small plots or even in a garage or shed, bees positively impact the surrounding environment through pollination and the semi-arid climates that render other crops fallow are ideal for beekeeping. According to one source, African bees are better for pollinating that European or American bees. That is because African bees emphasize colony growth over honey production, which necessitates more pollen to feed to bee larvae. In this way beekeeping may even be an excellent complementary practice for farmers with crops that require pollination, such as fruit trees.

Kenya is an interesting example of the potential for honey production. While it is not the continent’s largest producer, it is the largest consumer. Demand exceeds the country’s production, and so tons of honey are imported from neighboring Tanzania each year. The production gap is so large, in fact, that international exportation is yet to be a viable option, despite the high demand of the United Arab Emirates for African honey. This is due in part to the small-scale nature of Kenyan apiculture.

There are currently no commercial beekeeping or honey production operations in East Africa. Small-scale farmers currently manage the sector, which has both positive and negative aspects. The most obvious positive aspect of this is that more individual farmers profit– there is no large company taking a portion of their profits. The downside is that the industry is not operating at maximum efficiency given the gap in production ability. It seems unlikely; however, that consolidating wealth produced in this industry into the hands of a corporation would prove at all beneficial for the average African farmer who turns to beekeeping as a mode of poverty prevention.

The Future of African Honey

In a 2012 video with more than 35,000 views, modern techniques for African beekeepers are explored through the development of modern hives by a local company. This video demonstrates the sustainability of hive production: not a single aspect of beekeeping is wasted, meaning fewer dollars lost in the production of new colonies. Should apiculturists be enabled to engage in modern beekeeping techniques, this could greatly benefit their honey production and greater pollination?

Unfortunately, it does not seem that African bees are immune to illness. Bees around the world have been plagued by a parasite that cut global production in half. Unlike the agriculture branches of European or American governments, there has yet to be a concerted response to this threat by African governments. Responding to such threats require expensive scientific experiments and investment.

The Money is in the Honey

Investing in modern beekeeping techniques for small-scale African farmers has enormous potential. Doing so provides economic security for individuals and their families, and has positive externalities for surrounding crops, such as fruit trees or flowers, both of which are large export industries on the continent. Investment requires careful planning; including contingency plans for occurrences such as colony die off due to parasites or extreme weather. That being said, honey may just turn out to be the golden ticket out of poverty for African farmers.