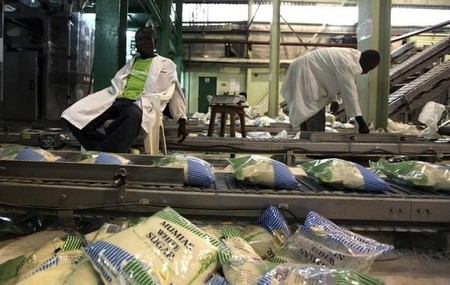 NAIROBI (Reuters) – Kenya has won a two-year extension of sugar import limits from a regional trade bloc to give it more time to overhaul its ailing sugar sector, a local daily newspaper said on Wednesday.

The arrangement capping cheaper imports from the Common Market for Eastern and Southern Africa (COMESA) was scheduled to expire soon.

The deal was struck at a meeting of COMESA in Madagascar, the Standard newspaper quoted a top official in the country’s ministry of industrialization and trade as saying.

The government is selling shares in some of its sugar factories, hoping to bring in capital and the expertise needed to pull the sector out of the doldrums.

Kenya produces about 600,000 tonnes of sugar a year, compared with annual consumption of 800,000 tonnes. The deficit is covered by strictly controlled imports from COMESA.

Experts have blamed the high cost of production for the problems facing Kenya’s sugar industry. Poorly funded government factories have aging machinery that is prone to breaking down. The roads in most sugar growing areas are also in poor shape.

The Kenya Sugar Directorate estimates the cost of producing a tonne of sugar at about $570 in western Kenya compared with $240-$290 in rival producers such as Egypt.