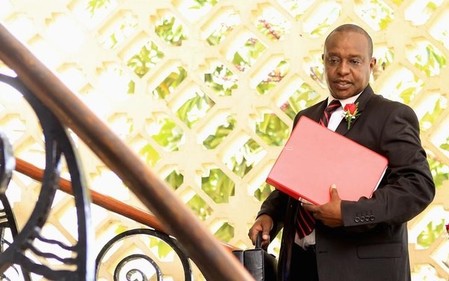 NAIROBI (Reuters) – Kenya is aiming for a budget deficit of 9.3 percent of GDP in fiscal year 2016/17 and plans to borrow 150 billion shillings ($1.48 billion) from external sources, probably by selling international bonds, officials said on Wednesday.

Finance Minister Henry Rotich said in a budget speech the deficit would be 691.5 billion shillings ($6.9 billion).

Kamau Thuge, the principal secretary at the ministry of finance, later told Reuters that figure would be equivalent to 9.3 percent of GDP.

Rotich gave the 150 billion shilling borrowing figure at a post-budget news conference. “We are still looking at accessing capital markets by way of sovereign bonds, we are looking at export credit arrangements and also bilateral and syndicated loans,” he said.

In April the finance ministry said the actual deficit in fiscal year 2016/17, which starts on July 1, would probably be around 6.9 percent of GDP, because ministries often struggle to spend their allocations.

“The failure to consolidate the fiscal balance any faster will be of some concern to markets,” Standard Chartered economist Razia Khan said. “Kenya’s accumulation of external debt has outpaced its ability to generate faster export growth to repay this debt.”

But Rotich said Kenya’s public debt “remains sustainable”, with the net present value of public debt to GDP below 50 percent and posing a “low risk of debt distress” based on assessments by the government, World Bank and International Monetary Fund.

“We remain committed to bringing the fiscal deficit down gradually to below 4 percent of GDP in the medium term,” he added. In the 2015/16 fiscal year ending this month, the forecast deficit was 8.7 percent of GDP, but has since been revised down.

“Our target to generate 1 million new jobs remains,” Rotich said, adding that he expected the economy to grow 6 percent in calendar year 2016 and by 7 percent in the medium term, compared with 5.6 percent growth last year.

The minister also outlined measures to boost revenue collection, including the potential introduction of a presumptive tax for those in the informal sector, who usually fall under the radar of the revenue authority.

“If everybody paid their fair share of taxes we would be in a better position to lower tax rates,” Rotich told lawmakers.

Thuge told Reuters local borrowing would remain nearly constant at 3 percent of GDP, ensuring local interest rates would not be under pressure.