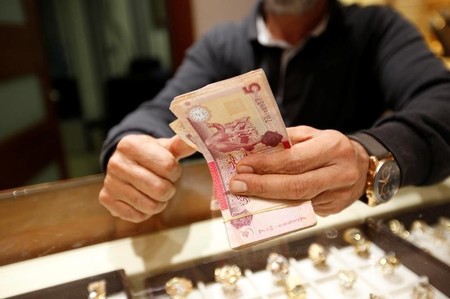 TRIPOLI (Reuters) – When the doors of a Tripoli bank open, hundreds of frantic customers surge forward, desperate for money they have been waiting weeks or months to withdraw.

The scene, now commonplace, is a stark sign of Libya’s slide towards economic collapse despite oil wealth, and a U.N.-backed government’s lack of headway towards ending years of political turmoil and armed conflict that have splintered the country.

Over the past week, frustration has spilled over into renewed street unrest and a public spat between Prime Minister Fayez Seraj and Central Bank Governor Sadiq al-Kabir over who is to blame for acute cash shortages.

The dispute shows the U.N.-backed Government of National Accord (GNA) struggling to control Libya’s finances even after a recovery in oil production raised the prospect of economic pressures easing.

A meeting convened by Britain and the United States in London on Monday is seen as a last-ditch effort to get Seraj and Kabir to work together and save Libya’s economy from deeper failure.

The GNA cautiously started trying to establish itself in Tripoli in March, three months after its creation under a U.N.-brokered power-sharing deal and five years after the uprising that ousted Muammar Gaddafi but sowed nationwide anarchy.

But the GNA has been unable to win backing from leadership rivals in the east or tame western Libya’s powerful armed factions. The worsening cash crisis and spiralling inflation quickly eroded hopes that the GNA could bring stability.

Some Libyans now queue overnight to collect wages and benefits. “I have not been paid my salary for almost four months,” Milad Lahmar, a physiotherapist and father of four, said outside Tripoli’s Al-Tijari Al-Watani bank.

“I have been waiting since dawn in front of the bank in a desperate attempt to get some cash.”

Wahda Bank, one of the country’s largest, said on Sunday its coffers would be empty until further notice.

The Libyan economy is almost entirely dependent on oil revenues, so solid GNA relations with the National Oil Corporation (NOC) and the central bank, which processes all NOC earnings, are crucial to coherent governance and policymaking.

The NOC and the central bank both fractured when rival governments and parliaments arose in Tripoli and eastern Libya in 2014. The Tripoli branches, which have retained control over payments, pledged to work with the GNA’s leadership, known as the Presidential Council. But relations between Seraj and Kabir have soured amid a political deadlock.

The eastern parliament, or House of Representatives (HOR), has blocked approval of GNA cabinets, and the finance minister has never taken up his post. The mostly powerless rival government appointed by the HOR, and its central bank governor, have limped on in Libya’s distant east.

Kabir’s mandate expired in late September, but he remains in the job by default because the HOR would have to approve any replacement under the U.N.-brokered deal.

A week ago, Seraj accused Kabir of holding up efforts to deal with Libya’s liquidity crisis by repeatedly resisting calls to provide credit and release foreign currency.

“We have exhausted our efforts … with al-Kabir,” he said in a TV interview. “Once again, his response was weak and sometimes non-existent.”

Kabir retorted three days later that Seraj’s council had only come up with “loose proposals” including the sale of “non-existent” dollars and devaluing the Libyan dinar.

“The Presidential Council did not submit any realistic, executive programs to be carried out on the ground,” he said.

Libya’s oil revenues fell to record lows earlier this year and the country is running huge deficits, covered by foreign reserves that will sink to $43 billion by the end of 2016 from more than $100 billion three years ago, the World Bank says.

Strict limits on access to foreign currency have created a flourishing informal exchange market where the dinar recently slipped to a new low of around 5.25 to the dollar.

Financial pressures have wrought shortages of subsidized food products, pushing food prices 31 percent higher in the first half of 2016, according to the World Bank.

Oil production recently doubled to nearly 600,000 barrels per day after eastern military commander Khalifa Haftar seized key oil ports from a rival faction and let the NOC reopen them. But output is still well under half pre-2011 levels.

Economists say Libya’s liquidity crisis will not be resolved without improved security and trust in the banking system. They say deliveries of new banknotes – sent from Britain to Tripoli and from Russia to the east – will help little.

In the capital, residents said they noticed little difference as 800 million dinars were flown in over the past 10 days. They say that corruption means only the powerful have quick access to funds.

“I only hear about money being printed outside Libya and brought here, but we receive nothing,” said Lahmar, the physiotherapist. “There is no transparency.”