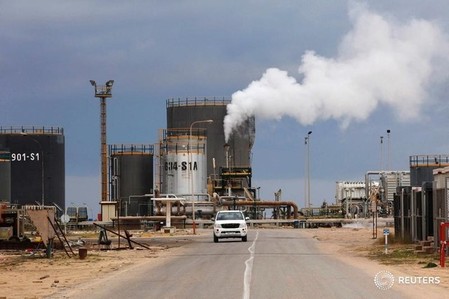 TRIPOLI (Reuters) – Libya was producing 685,000 barrels of oil per day (bpd) on Sunday, up from around 600,000 a day last month, an official from the National Oil Corporation (NOC) said.

Output has risen after a two-year blockade was lifted two weeks ago on major pipelines leading from the western fields of Sharara and El Feel.

Production has been resuming gradually at Sharara, which has a capacity of 330,000 bpd. But there has been no announcement of a restart at El Feel, which can produce 90,000 bpd but where a group of guards has been blocking operations. The NOC official declined to give details on the status of operations at the fields.

National output remains far below the more than 1.6 million bpd that Libya was producing before its 2011 uprising. The NOC says it hopes to raise production to nearly 900,000 bpd by March, but this remains at risk from political conflict.

Libya is one of two members of the Organization of the Petroleum Exporting Countries (OPEC) that is exempted from a recent deal to cut output.